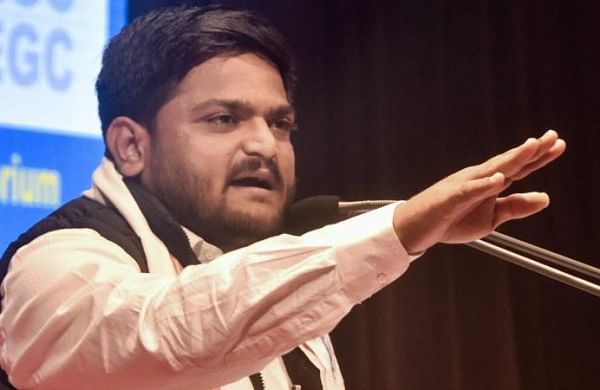 NEW DELHI/AHMEDABAD: Soon after Hardik Patel quit the Congress on Wednesday, the opposition party alleged that the BJP has "lured" the Patidar leader by promising to get cases against him withdrawn and has "scripted" his resignation letter.

Congress leader and party spokesperson Shaktisinh Gohil also launched a scathing attack on Patel, calling him "dishonest" and an "opportunist", and claimed that youth leaders who have switched to the BJP have been reduced to "zero".

Patel, who gained prominence in 2015 after he led the agitation seeking reservation for the Patidar community and was made the Gujarat Congress working president in July 2020, has accused its top leadership of behaving as if they hated Gujarat and Gujaratis.

In his resignation letter, he was also critical of the Congress' stance on the Ram temple in Ayodhya, revocation of Article 370 from Jammu and Kashmir and the implementation of GST.

"Hardik Patel has not written anything and his resignation letter has clearly been dictated by the BJP. The pen and the face are ours and the script is that of the BJP. It (resignation letter)is completely bogus and has no truth in it," Gohil told reporters.

The development has come as a jolt to the Congress which is seeking to dislodge the BJP from power in Gujarat where assembly elections are due in the next few months.

Gohil said the Congress gave opportunities to youth leader Hardik Patel and made him the working president of the Gujarat Congress, but he was lured by the BJP.

"The BJP has got Hardik Patel to resign by using all means, including getting a CD on him, and used agencies like Enforcement Directorate and CBI and used all measures that were below the belt," he alleged.

"There are cases of sedition, rioting and many others and he can't contest elections," he said and claimed the BJP government has approached the High Court to take back the cases against him.

"Since then this plot was clear that Hardik Patel is moving with the BJP to get cases against him withdrawn," he said.

Youth Congress chief BV Srinivas also said his letter and said, "The 'letter' about defeating the 'truth' has come, Every word of it is of the BJP!" In another tweet, he said, "No Caption Needed !!" and shared a tweet by Hardik Patel where he spoke of never changing sides and of continuing his fight while being in the Congress till his last breath.

He said none of the demands of the Patidar community after their agitation has been fulfilled and asked Hardik Patel as to what personal agenda and gains he had that he forgot his community which made him a leader.

"Why has your attitude changed?" he asked.

"Your colleagues of the Patidar community have accused you of selling party tickets given to you by the Congress and you misled the party and did not grant tickets to real workers. It would have been good if you answered your Patidar colleagues on the charges made out against you," Gohil also asked.

He claimed that after Rahul Gandhi's rallies in Gujarat, the BJP is rattled and the people of the state have turned against the ruling party.

"The BJP is fearing losing power. They have resorted to these kinds of measures by getting Congress leaders to defect to the BJP."

"This country can never become Congress-mukt because the Congress is people's party. However, the BJP has now turned 'Congress-yukt' and that is why they are taking Congress leaders," he said.

He claimed Hardik Patel was trying to put pressure on the party not to take Naresh Patel into the party and "to listen to him only".

''He used to try to remain close to Rahul Gandhi once to gain political ground. Now, he is criticising the leadership. It shows that he is an opportunist," Gohil said.

The Congress party has always encouraged youth leaders and such desertions will not affect this policy, he said.