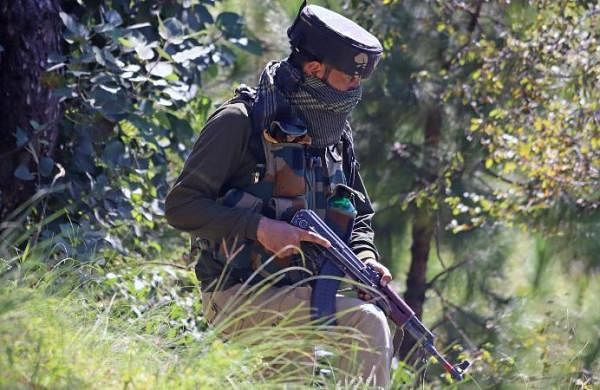 NEW DELHI:  A batch of foreign terrorists under the banner of a new terror outfit — Harkat 313 — is believed to have snuck into the Kashmir Valley.  According to highly placed sources in the security establishment, the terrorists, who are giving a tough time to security set up, were tasked with attacking vital government installations to disturb the law and order situation in the Kashmir Valley.

“This is the first time we are hearing about this group. All we know at this point about them is that this group comprises exclusively of foreign terrorists. Whether this name is being floated as a smokescreen, to divert attention away from Lashkar-e-Toiba, which is known to push Pakistani terrorists in the Valley, we don’t know at the moment,” said a senior security official.

Several high-profile government installations are believed to be in the crosshairs of this terrorist group, the official added. Security was accordingly enhanced up at various points such as the ongoing hydropower projects and the Srinagar airport.

The security grid is working overtime to find out more about this group, its benefactors and Over Ground Workers (OGWs) in the Valley. The activities of this new group are being seen in the backdrop of Taliban’s takeover of Afghanistan.

“We received specific information about some targets, including two vital locations — one in North Kashmir and one in South, that could be in the crosshairs of the terrorists of this new outfit but owing to operational constraints, we cannot reveal them at this point in time,” a top intelligence official told this newspaper.

With regards to the Srinagar airport, several security review meetings involving various agencies, including Bureau of Civil Aviation Security, J&K Police, CRPF and CISF, have already taken place, in the wake of the terrorist attack on an IAF base on June 28.

Meanwhile, the BSF and the army are on high alert as Pakistan is desperately trying to push terrorists into India just before the onset of winter. Over the past three days, seven army personnel were killed in various counter-insurgency operations in J&K’s Poonch district.

VITAL Installations Among targets
As high-profile government installations are believed to be in the crosshairs of this terrorist group, there has been upgrade in security set-up at various points such as the ongoing hydropower projects and the Srinagar airport