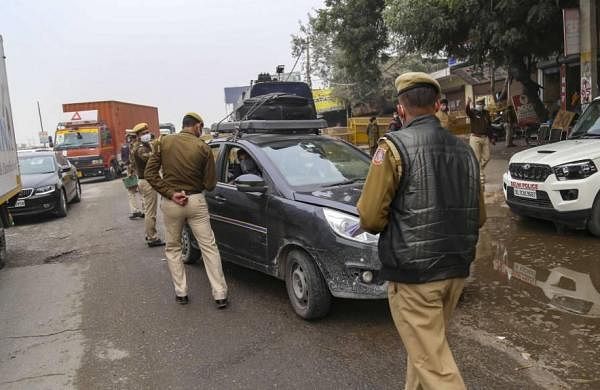 CHANDIGARH: Haryana on Thursday completely sealed its borders with Punjab as farmers from the neighbouring state started assembling in large numbers as part of their 'Delhi Chalo' march to protest the Centre's new farm laws.

There was heavy deployment of Haryana police on the borders with Punjab, officials said. The Haryana Police in adequate strength has also been deployed along the state's borders with Delhi, they said.

The BJP government in Haryana had said that it would seal its borders with Punjab on November 26-27 in view of the farmers' march to Delhi.

The Delhi Police had on Wednesday asserted that it had rejected requests received from various farmer organisations to protest in the national capital against the Centre's new farm laws on November 26 and 27.

A day earlier, it had said that legal action would be taken against the protesting farmers if they come to the city for any gathering amid the COVID-19 pandemic.

"We are ready to move towards Delhi to force the central government to scrap its black laws which are not in the interest of the farming community," he said.

Punjab farmers, representing over 30 farm bodies, have announced to go towards the national capital through many routes, including Lalru, Shambhu, Patiala-Pehowa, Patran-Khanauri, Moonak-Tohana, Ratia-Fatehabad and Talwandi-Sirsa.

The farmers protesting against the Centre's farm laws are assembling near Haryana borders with tractor-trolleys carrying ration and essentials for their proposed Delhi march.

They have also condemned the Manohar Lal Khattar government in Haryana for sealing the state borders.

In Haryana, police had used water cannons twice in Ambala and Kurukshetra districts on Wednesday to disperse a group of protesting farmers and stop them from going to Delhi.

The Haryana authorities have also imposed prohibitory orders under Section 144 of the CrPC in several parts of the state to prevent assembly of protesters.

Meanwhile, braving the cold and rainy conditions, thousands of farmers spend the night in temporary shelters and inside their tractor trollies.

Farmer bodies said they will hold a dharna wherever stopped from moving towards the national capital.

Bharatiya Kisan Union (Ekta-Ugarhan) general secretary Sukhdev Singh Kokrikalan has said around 25,000 women will participate in the protest march and over 4,000 tractor-trailers have been arranged for it.

The BKU (Ekta-Ugrahan) has claimed that over two lakh farmers associated with it will enter Haryana through Khanauri and Dabwali.

Farmers have brought ration, vegetables, wood and other essentials for their march.

In view of cold weather conditions, they have stocked quilts, blankets and covered their trolleys with tarpaulin.

Haryana Bhartiya Kisan Union (BKU) chief Gurnam Singh Charuni had said on Wednesday that even if police use lathis and force, nothing can stop farmers".

"We will continue our march towards Delhi. We will force the Centre to roll back these black anti-farmer laws," he said.

Videography, including using drone cameras, is being done at the state borders with Punjab and other sensitive points.

The Haryana Police has also put up multi-layered barricades and boulders on the roads from Punjab, officials said.

Earlier on Tuesday, a detailed advisory was issued by the Haryana Police, urging commuters to modify their travel plans in view of the farmers protest march.

Asserting that farmers from Punjab will not be allowed to enter the state, police said they have deployed water cannons and riot vehicles at the state borders.

Opposition Congress in Haryana has slammed the BJP-led government for allegedly trying to muzzle the voice of farmers.