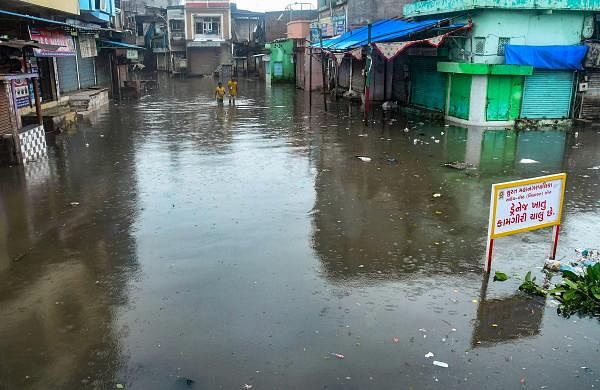 AHMEDABAD: Nearly 5,000 people were shifted to safer places in Gujarat's Bharuch and Vadodara districts after flooding in several villages there due to rise in level of the Narmada river as heavy rains continued in various parts of the state, officials said on Monday.

Due to continuous inflow of water from upstream in the Sardar Sarovar Dam over the Narmada near Kevadia village, 9.86 lakh cusec (cubic foot per second) water is being released in the river by opening 23 out of its 30 radial gates, an official release said.

The water level of the dam has reached 132.63 metres as against its full reservoir level of 138.68 metres, it said.

As a result, the level of the Narmada river has risen significantly in the last few days and water has now started entering the low-lying villages situated on its banks in Vadodara and Bharuch, relief commissioner Harshad Patel told reporters in Gandhinagar.

"Nearly 5,000 people living in these villages and in low-lying areas of Bharuch town have been shifted to safer places. We urge people not to go near any river. District authorities and the National Disaster Response Force (NDRF) have been alerted across the state," Patel said.

A road leading to Chandod village near the Narmada in Vadodara's Dabhoi taluka has been shut for traffic to stop people from going near the river, local police said.

People from across the state visit the riverbank in Chandod for 'asthi visarjan' (ashes immersion).

Ahmedabad Collector K K Nirala on Monday issued an order to shut the Dhandhuka-Ahmedabad and Dhandhuka-Limbdi highways after the Sukhbhadar dam in neighbouring Botad district overflowed and inundated these roads.

Rains continued to lash several parts of Gujarat on Monday also. As many as 37 talukas of the state received over 100 mm (heavy) showers in the 24 hours ending at 8 am on Monday, a government release said.

Five of these talukas received over 200 mm rainfall.

The Jamjodhpur taluka in Jamnagar recorded 237 mm rain, followed by Khambhalia in Devbhumi Dwarka-215 mm, Morbi and Jamnagar talukas-204 each, and Gadhda taluka in Botad district-203 mm, the release said.