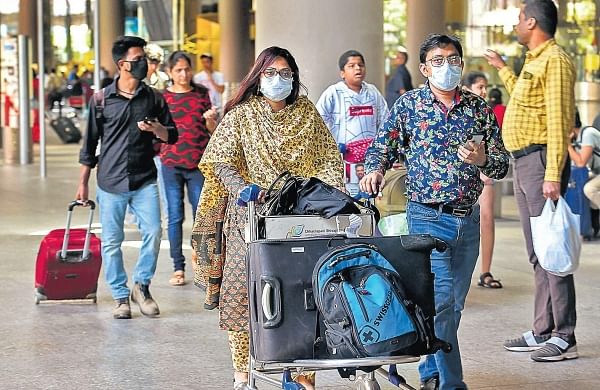 MUMBAI: The Mumbai airport witnessed chaotic scenes on Friday due to heavy passenger rush amid the festive season and airlines advised travellers to report early to allow sufficient time for security check.

Many people took to social media to mention about the chaos and also shared pictures and videos of the scenes at the airport, which is operated by Adani Group.

In a statement, the airport operator said with the onset of the festive season, there has been a surge in passenger traffic and a sudden spike was witnessed at CSMIA this morning. The aerodrome is known as Chhatrapati Shivaji Maharaj International Airport.

Other city airports of the country also witnessed similar scenes, it added. The operator also expressed regret over the inconvenience caused to any passenger and said that it was offering them all the support required.

Along with a video of the jam-packed terminal, another passenger said, "complete chaos at Mumbai airport and the poor admin/officials have no idea how to control it. Proper mismanagement".

"Due to Security Hold Area congestion at Terminal T2 Mumbai Airport, we recommend our customers to report early for check-in to avoid any inconvenience," Vistara said in a tweet.

IndiGo issued an advisory asking its passengers at Mumbai and Chennai airports to report early to allow sufficient time for security check.

According to the airport operator, owing to recent intelligence reports received by stakeholders and threats at another airport in the state, security has been further beefed up at CSMIA.

"The security and safety of our passengers are of utmost priority and our endeavour is to continue to not compromise on these critical aspects," it added.

CSMIA has deployed additional staff for a quicker turnaround at all the security checkpoints for a smoother passenger experience.

Additionally, the airport is following all the COVID protocols laid down by the government to ensure a smoother transition, the statement said.