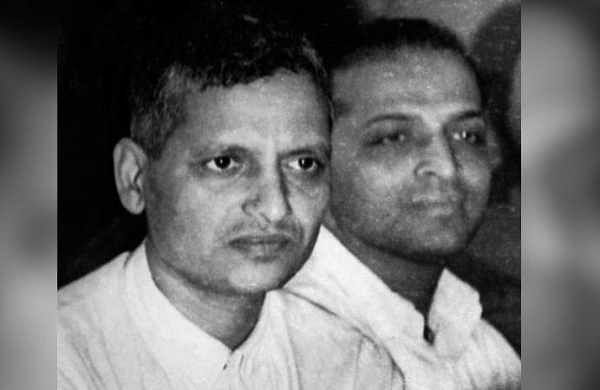 BHOPAL: The Hindu Mahasabha observed the 70th anniversary of the hanging of Mahatma Gandhi’s assassin Nathuram Godse and his prime collaborator Narayan Apte as Balidan Diwas in Daultganj area of Gwalior on Friday.

Not only were the photographs of the duo (hanged to death in Ambala Jail on November 15, 1949) garlanded, but the Hindu Mahasabha activists wearing saffron caps also performed their Aarti, besides singing bhajans in their memory.

The entire program was held at the Mahasabha’s office, where a banner glorifying the duo’s act was also put up.

“It’s not the first time that we’ve observed Balidan Diwas to mark the anniversary of the execution of Nathuram Godse and Narayan Apte, as in the past too, we’ve organized the same program,” Hindu Mahasabha vice president Jaiveer Bhardwaj said.

After the program, the Mahasabha leaders also submitted to the local administration representatives a memorandum addressed to CM Kamal Nath. “The memorandum contains four demands, including the demand to include in the state’s school curriculum Nathuram Godse’s last recorded statements before the trial court, which will educate our young generations about his real nationalistic persona.

Also, we’ve demanded that when Jawaharlal Nehru’s birth anniversary is celebrated as Bal Diwas, then the martyrdom of tenth Sikh Guru Gobind Singh’s two sons (who were tortured and then executed by burying them alive into a wall over their refusal to convert to Islam) be observed as Bal Shahid Diwas,” Bhardwaj said.

“We’ve also demanded that Nathuram Godse’s statue that was seized by local administration-police from our office in 2017 under pressure of the then opposition Congress be returned to us and those who vandalized Swami Vivekanand’s statue at the JNU campus be booked for sedition.”

According to reports from Gwalior, no attempt was made by the local administration or police to stop the program. The local police station cops and the tehsildar instead waited outside the building housing the Mahasabha’s office and returned after taking from the right-wing Hindu outfit’s leaders, the memorandum of demands addressed to the chief minister.

Importantly, two years back, while the BJP was in power in the state, the Mahasabha activists had attempted to establish Hutatma Nathuram Godse temple on the office premises by installing his idol, but the local administration and police had then foiled their plans by seizing the statue from the office.

However, despite a Congress government in power in the state for the last 11 months, no action was taken in the matter by local administration-police on Friday.

“I’ll talk to the Gwalior district collector in the matter, but since the BJP is presently showing so much commitment towards Mahatma Gandhi, so the PM and Union home minister also need to intervene in the matter, particularly as those involved in the incident are part of BJP only,” Sharma told journalists over phone.

Former MP minister and senior BJP leader Narottam Mishra, however, distanced his party from the Gwalior development, saying neither such happenings should take place, nor politics should be played over it.