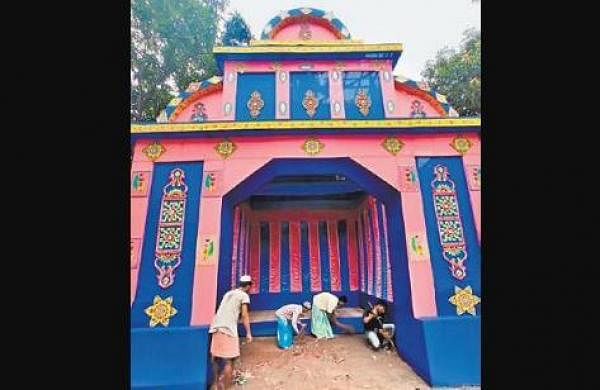 KOLKATA:  At a time when communal violence has overtaken Bangladesh, leading to the death of at least 11 people, a village in Bengal’s Burdwan district has set an example of communal harmony during Lakshmi Puja.

Residents of Dharmadanga village have joined hands to celebrate the festival of the goddess of prosperity irrespective of religious beliefs. Like previous years, the festival is keeping Hindus and Muslims of the village busy cleaning the Puja venue and distributing prasad. When the state witnessed sharp polarisation in recent elections, Hindu residents of the village continued visiting their Muslim neighbours on Bakri Eid and Eid-ul-Fitr.

“We organise cultural events and sit together for lunch and dinner during these four days of the Lakshmi festival. This is a tradition of our village where bonding between us is the priority, not an individual’s religious belief,” said Asmat Ali of Dharmadanga.

Asmat’s neighbour Bidyut Das said a major chunk of the subscription for the Lakshmi Puja comes from the Muslim participants. “This Puja has always been the main festival of our village inhabited mainly by farmers. We join hands to celebrate the festival and spend time together during these four days. We respect each other’s religious beliefs,’’ said Das.

“In any crisis, we come forward to help each other. We are not bothered about the tricks played by political parties. What we know is that bonding between people is the most important thing that can help us overcome any tough time,’’ said Saukat Mollah.