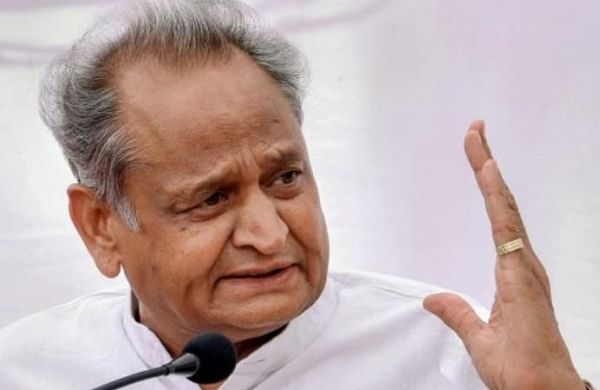 JAIPUR:  The political row over the controversial remarks made during the Rajya Sabha (RS) polls in Rajasthan became more serious on Friday. Ten BJP MLAs have now jointly lodged a complaint for a privilege motion against CM Ashok Gehlot with Assembly Speaker CP Joshi.

Joshi had already summoned the state BJP chief Satish Poonia for a hearing over a privilege motion complaint moved by Sanyam Lodha, a Congress-supporting Independent MLA of the Rajasthan Assembly.

Significantly, the Special Operations Group of the Rajasthan Police, which is probing this case on Gehlot's order, has finally registered an FIR on the basis of two mobile phones but so far nobody has even been questioned in this case.

The SOG, has revealed that in their probe on the horse-trading complaint, two suspicious phones were tracked and phones of several politicians were kept on surveillance. On the basis of those mobiles some revealing facts have been uncovered. "In their conversations, these politicians talk about their preferred choice for CM and they even talk about changing the CM. There is also talk of offers being made for greater participation in governance. We will soon question some of these politicians," said Addl DGP (SOG) Ashok Rathore. The SOG has registered the case under sections 124  ( A)  and 120 ( B) and after the SOG initiative, power corridors in Rajasthan are buzzing overtime.

The ten BJP MLAs who have sent a signed complaint to the Speaker include Ashok Lahoty, Ramlal Sharma, Nirmal Kumawat and even the Leader of the Opposition in the Rajasthan Assembly, Gulab Chand Kataria.

They have quoted CM Gehlot’s statement where he made serious charges of  horse-trading ten days before the RS polls on June 19 claiming that top BJP leaders were trying to lure Congress and independent MLAs in Rajasthan by offering them 35 crores each to cross-vote during the polls.

Earlier, in his complaint seeking breach of privilege motion against Poonia on June 21, independent MLA Sanyam Lodha had blamed Poonia for allegedly tarnishing the image of 23 lawmakers.  Poonia had reportedly remarked that 23 MLAs were offered bribes – ranging from offers of mines, plots, and cash - by the ruling Congress to vote in favour of their candidates in the RS polls in the state.

However, Joshi had prima facie found merit in the privilege motion which Lodha wants to move and had summoned Poonia to explain his stand on the complaint against him. Now, the Speaker will need to take a decision on both the complaints before him – one by Sanyam Lodha and the other by BJP MLAs.

Meanwhile, the Congress has termed the complaint by BJP MLAs against Gehlot as a sign of desperation. Chief Whip Mahesh Joshi who had filed a complaint about alleged horse-trading with the state Anti-Corruption Bureau remarked, "If the BJP wanted to bring a motion, they should have brought it against me, not the CM. Just today, I have written to the ACB and to the Special Operations Group of Rajasthan Police to take action on the horse-trading complaint that I had filed."

After that, all Congress MLAs and those supporting the party candidates were herded together in a luxury resort in Jaipur.

Meanwhile, Kataria hasargued that Lodha's privilege motion should have been rejected but was brought in on instigation by the Congress. He remarked, "The privilege move against CM Gehlot is the result of the manner in which Satish Poonia was dragged into controversy over horse-trading charges and the government side hyped the issue. If needed, we may even move a motion against the Chief Whip of the Congress, Mahesh Joshi. If ACB and SOG have not found any substance on his allegations of horse-trading, the BJP will initiate tough legal steps against Mahesh Joshi."

Poonia felt that all these remarks were made outside the Assembly and the matter is now in the Assembly and it is for the Speaker to take a decision. "Much before I said anything, the CM had claimed that horse-trading at the rate of 35 crores per MLAs was underway. If he produces any evidence for his allegations, so will I," he said.

All eyes are now focused on what action Speaker Joshi will take on both the tricky complaints before him.