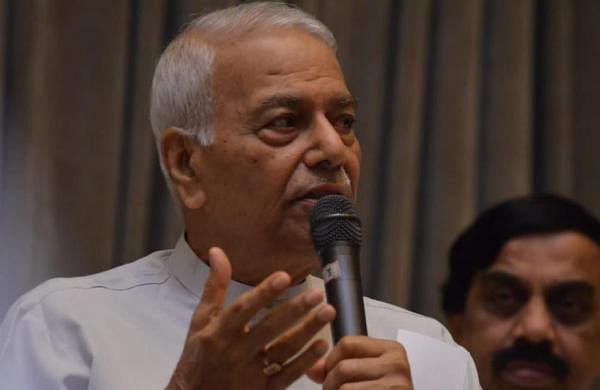 BENGALURU: Yashwant Sinha, the presidential candidate supported by Opposition parties, on Sunday affirmed here that India needs a 'Rashtrapati' who serves as the impartial custodian of the Constitution and not a silent rubber-stamp -- and took a pledge to work for the repeal of the sedition law of the British Raj.

Briefing the press after taking part in the Congress Legislative Party (CLP) meeting chaired by its leader and opposition leader Siddaramaiah at a hotel, Sinha took a dig at Prime Minister Narendra Modi’s regime.

"In the past eight years, the ruling dispensation has launched repeated assaults on democracy and secularism, which form the founding principles of our Republic. It has unleashed a poisonous communal propaganda," he alleged.

Welcoming the Supreme Court’s indictment of former BJP spokesperson Nupur Sharma for her remarks on Prophet Mohammed, he regretted that BJP supporters who had rejoiced at the SC's verdict on the Ram Janmabhoomi issue, are now trolling the Supreme Court.

"I fully endorse the view and congratulate CJI NV Ramana for this forthright affirmation. Indeed, I have been saying, since I filed my nomination papers on June 27, that the sole purpose behind my acceptance of the combined Opposition's offer to be their candidate is to safeguard the Constitution and its lofty values, which are today under unprecedented threat," he said.

The Centre has weaponised ED, CBI, Election Commission and even the Governor’s office against Opposition parties, their leaders and gover nments. In Maharashtra, it toppled the coalition government by facili tating the kidnapping of Shiv Sena MLAs to Gujarat and Assam, both BJP-ruled states.

The Centre has no respect for the federal structure, as it has been constantly encroaching the powers of States, he alleged. He also condemned the Karnataka government for attem pting to communalise the minds of the youth by introducing a new school curriculum.

He read out his pledges, including to restrain the Centre if it in any way aids and abets undemocratic practices like 'Operation Kamal'. "I shall speak out against atte mpts to polarize India. I shall defend the Freedom of Press, Sp eech and other rights and freedoms the Constitution grants (with rea sonable restrictions) to citizens, regardless of their religion or ideology," he stated.