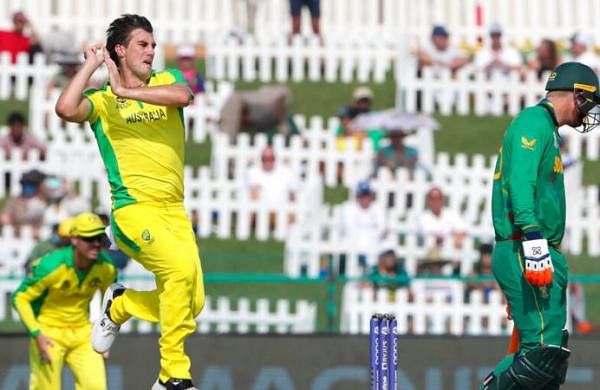 ABU DHABI: Australia's bowlers scythed through South Africa's top and middle-order batting lineup to restrict them to 118 for nine in their ICC T20 World Cup opener here on Saturday.

Had it not been for Kagiso Rabada's 19, which included a one-handed six off Starc in the final over, South Africa would have got less.

South Africa started well after skipper Temba Bavuma oversaw a productive first over with two lovely boundaries through the off-side.

However, Glenn Maxwell had other ideas as the star all-rounder offset Mitchell Starc's expensive opening over with the dismissal of the in-form Bavuma (12), who was bowled by a delivery that turned very little after the batter had refused to play on the front foot, something that could have saved him.

Pacer Josh Hazlewood left Rassie van der Dussen (2) stunned first up with a peach of a delivery that landed in the channel just outside off before taking an edge for wicketkeeper Matthew Wade to complete a simple catch.

One of South Africa's seasoned stars, opener Quinton de Kock pulled Maxwell over mid-on for a boundary but in the first ball of the next over, the wicketkeeper-batter played a Hazlewood delivery on to his stumps after seemed to play a paddle scoop.

The dismissal looked quirky as de Kock saw the ball lob on to hit the stumps.

His tails up after two early wickets, Hazlewood did not concede a single run in the next five balls, leaving South Africa in a spot of bother at 23 for three.

Thanks to an exquisite boundary through mid-off by Aiden Markram, the Proteas added seven runs in the sixth over to finish the power play at 29 for three.

Australia couldn't have asked for more and after Heinrich Klaasen got himself two boundaries on either side of the wicket, they tasted one more success when Pat Cummins had the batter caught at backward point after a leading edge.

Meanwhile, Maxwell came back to complete his quota of four overs, giving just 24 runs for the big wicket of Bavuma.

Leg-spinner Adam Zampa struck twice in the 14th over, including taking the wicket of David Miller, to leave the South Africans tottering at 82 for six, which became worse after Keshav Maharaj was run out following a horrible mix-up.