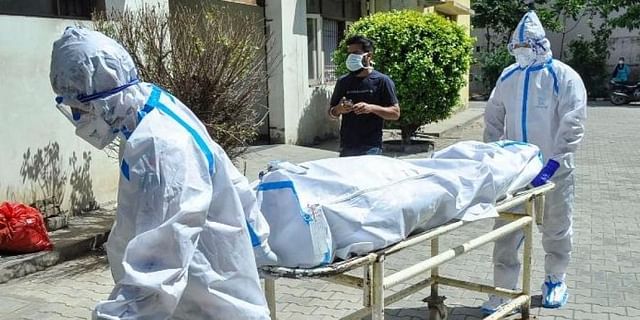 LUCKNOW: In a strange incident, an Income Tax official, who used to work in Gujarat and had been missing for the last 18 months, was found mummified, wrapped in a blanket at his home in Kanpur recently.

The I-T official had died of cardiac arrest during the second wave of the pandemic after getting inflicted by the deadly virus in April, last year.

The man’s body had turned into a cadaver which was kept on a wooden bed wrapped in a blanket as the family was not ready to accept that he was no more. They used to take care of the dead body thinking it to be comatose.

Reduced to skin and bones like a mummy, the mortal remains of Vimlesh Sonkar, 48, were seized by a medical team accompanied by Kanpur police on Friday and sent to Lala Lajpat Rai Hospital for a medical examination and autopsy.

As per the Kanpur Police sources, the deceased was an employee of the Income Tax department and was posted in Ahmedabad. He belonged to Kanpur and used to stay at Krishnapuri under Rawatpur police station area of Kanpur along with his wife Mithali, who works in a co-operative bank.

Vimlesh died on April 22, 2021. Doctors, at a private hospital, had declared him dead and issued a death certificate mentioning that he died of cardiac arrest. But his family did not believe that he was no more and took the body to another hospital, where doctors confirmed his death.

The sources claimed that then flouting the COVID protocol the family managed to take Vimlesh’s body home, laid him on a “takhat” wrapped in a blanket. They used to bathe the body with ‘Gangajal’ daily and balm the body with an Ayurvedic paste every day.

However, the truth of Vimlesh was revealed after his department from Ahmedabad asked Kanpur district officials to investigate why he was absent for so long. In fact, the family used to send medical certificates from time-to-time extending leave on pretext of illness.

Chief medical officer (CMO) Alok Ranjan said: “Whenever his department asked the family about him, they were told he was ill. The department then sent a letter to the Kanpur district magistrate and he asked us to investigate. Our team visited Vimlesh’s house on Friday. As the family members were protesting, police had to be called.”

Meanwhile, when the medical team saw the body, it was in a horrible state. “The flesh had dried up but there was no foul smell. The body looked like cadaver used by students of medical colleges to study human anatomy as it had turned black.

It had turned into a skeleton as the musculature had totally dried up and teeth had come out of the jawline,” a health official adding that anything conclusive could be said only after autopsy report was out and investigations were complete.

When health officials questioned his family members, they firmly refused to hand over the body to them saying he was alive. Vimlesh’s father Ram Avtar claimed that they had kept the body as such as a doctor had examined Vimlesh and told them that he was alive and his heart was beating.

It took the officials some convincing to do. Vimlesh’s wife let the officials take control of the body after being told “that as her husband is ill and required urgent medical aid”. The family created a ruckus when the body was shifted to the mortuary after autopsy. (AIR NEWS)