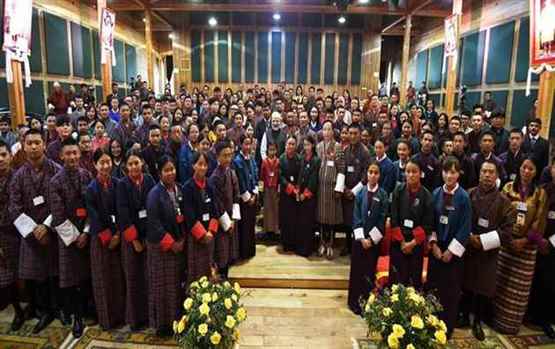 Prime Minister Narendra Modi today said going beyond the traditional sectors of cooperation, both countries are seeking to cooperate extensively in new frontiers, from schools to space, and digital payments to disaster management.

He said that 1.3 billion Indian people are ready to partner with Bhutanese people in their future endeavours, especially in education.

He said it is a matter of great happiness that young Bhutanese scientists will travel to India to work on designing and launching Bhutan’s own small satellite.

He hoped that the youth gathered on the occasion will go on to become scientists, engineers and innovators.

Prime Minister Narendra Modi said that happiness shall always prevail over mindless hate. He said, Bhutan’s message to humanity is happiness which springs from harmony and opined that the world can do with a lot more happiness.

Addressing the students of Royal University of Bhutan in Thimphu this morning, Mr Modi appreciated that Bhutan has understood the essence of happiness as well as the spirit of harmony, togetherness and compassion. He said the whole world associates Bhutan with the concept of Gross National Happiness.

The Prime Minister said, India and Bhutan's history, culture and spiritual traditions have created unique and deep bonds between the two nations and its people. He said, it is therefore natural that people of Bhutan and India have a great attachment to each other.

He said that deep spirituality and youthful vigour are the common and constant threads of Bhutan's past, present and future. He said India is fortunate to be the land where Prince Siddhartha became Gautam Budhha, and from that, the light of Buddhism spread all over the world.

The Prime Minister added that much of what he wrote in the book - Exam Warriors - is influenced by the teachings of Lord Buddha, especially the importance of positivity, overcoming fear and living in oneness, be it with the present moment or with Mother Nature.

Saying that there is no better time to be young than now, he called upon the youth to find innovative solutions to overcome every challenge they face.

Mr Modi said India is also home to among the biggest start-up eco-systems in the world and this is a great time to innovate in India.

He said, India is witnessing historic transformations in a wide range of sectors. He cited Ayushman Bharat, which is the world’s largest healthcare programme and offers health assurance to 500 million Indians.

He added that India is eliminating poverty faster than ever before and the pace of infrastructure construction has doubled in the last five years. (AIR NEWS)