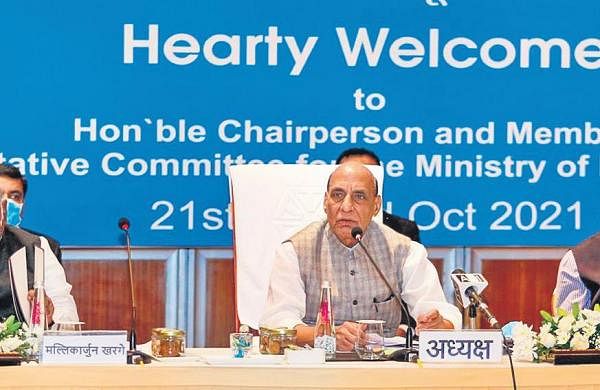 BENGALURU: Defence Minister Rajnath Singh on Thursday emphasised on the initiatives taken by the Union Government to increase defence exports from India, stressing that the country had emerged in the Top 25 global defence exporting countries for the first time.

A tweet put out by the “Office of the Raksha Mantri/ Defence Minister of India” quoted Singh saying, “According to the 2020 report of Stockholm International Peace Research Institute, India has featured in the list of top 25 defence exporting countries of the world for the first time. The Defence Ministry is making constant efforts so that India can become a global leader in defence exports.”

He said the private sector industry, which is only a decade-old, held 80-90 per cent share in the country’s defence exports. “A new strategy has been developed for export of weapons/equipment de-inducted by the services. Such items will be exported to friendly foreign countries after refurbishment by the industry. Its implementation guidelines are being finalised,” he said in the tweet.

Singh on Thursday visited Defence public sector undertakings (PSUs) in Bengaluru and chaired a closed-door meeting of the Consultative Committee of the Defence Ministry. Sources said Singh reviewed the functioning of defence PSUs, discussed the role of the private sector in defence manufacturing and export of defence products from India.

The Centre has set a defence exports target of Rs 35,000 crore by 2020-25 and the government is encouraging the private sector to play a larger role in strengthening the defence manufacturing sector, sources said. The Defence Minister, who arrived in Bengaluru on Thursday on a two-day visit to the state, will be attending the inaugural ceremony of the three-day conclave organized by the Indian Air Force in commemoration of the golden jubilee of the 1971 India-Pakistan war.

Prime Minister Narendra Modi is scheduled to deliver the keynote address in the virtual mode (webcast) at the conclave which is being held at Air Force Station Yelahanka, Bengaluru. The conclave will be attended by senior officers from the Ministry of Defence, including Chief of Defence Staff, General Bipin Rawat, who will speak on “higher directions of war: deriving aim and objectives.”