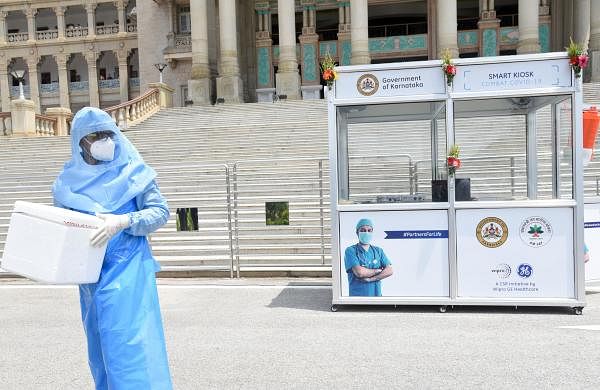 NEW DELHI: As India entered coronavirus lockdown day 65, a total of 6,566 new cases and 194 new deaths were reported in the last 24 hours according to the Health Ministry data on Thursday. India's total tally of COVID-19 now has reached 1,58,333.

This is the second-highest number of deaths reported in 24 hours, it was on May 5 when India had reported 195 deaths in a day.

Of the total cases, at least 86,110 are active cases and 4,531 people lost their lives while a total of 67,691 people have recovered taking the recovery rate to 42.75 percent. The death rate hovers at 2.86 percent which was 2.85 percent on Wednesday. India continues to maintain the plateau of over 6,000 cases per day.

Maharashtra's position remained the same with the highest number of total cases -- 56,948 -- which is 35.96 percent of the total number of cases in the country, followed by Tamil Nadu with 18,545 cases and Delhi with 15,257 cases. The national capital surpassed Gujarat's total cases which were the third worst-hit state till now. The state of Gujarat reported 15,195 cases.

Maharashtra on Wednesday reported the highest number of COVID-19 deaths so far at 105, including 32 in Mumbai, taking the count of overall fatalities to 1,897, a Health official said.

The infection is witnessing a surge in Bihar (3,061) and Uttar Pradesh (6,991) mostly due to the migrant exodus from urban areas to rural ones in these states.