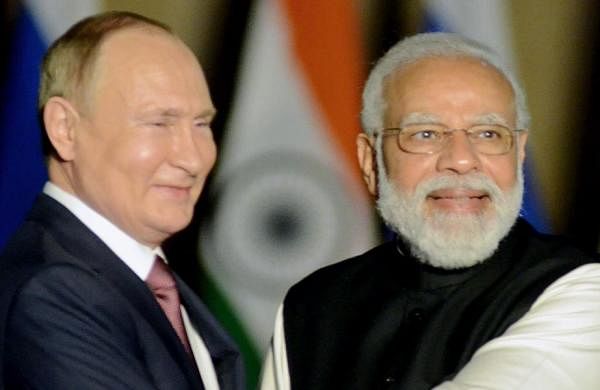 NEW DELHI: India and Russia have been in regular touch on Afghanistan and regional issues, Prime Minister Narendra Modi said on Monday and noted that the two countries have not only helped each other without hesitation but also taken care of each others' sensitivities.

The Prime Minister, who held the annual summit meeting with Russian President Vladimir Putin at Hyderabad House here, said that the 2+2 mechanism between the two countries has started a new mechanism to increase cooperation between the two countries. "Both countries have not only helped each other without any hesitation but have also taken care of each others' sensitivities. This is really a unique and trustworthy model of intrusted friendship," he said.

This is the first in-person between PM Modi and Putin since they met on the sidelines of the BRICS summit in 2019 in Brasilia. The visit of the Russian leader is in continuation of the tradition of annual summits held alternately in India and Russia.

PM Modi said that various fundamental changes had occurred at the global level in the last few decades and multiple new geopolitical equations have emerged but despite these variables, the friendship between the two countries has been constant.

He emphasised that 2021 is a special year for the strategic partnership between India and Russia. "Today, the first 2+2 dialogue was convened among our foreign and defence ministers. The dialogue has begun a new mechanism to increase our practical cooperation. We have also been regularly in touch on Afghanistan and other regional issues," the Prime Minister said.

"The regional partnership that began from Eastern Economic Forum and Vladivostok summit today is turning into real assistance between Indian states and Russian Far East," he added. The Prime Minister said the two countries are also implementing a long-term vision to strengthen economic ties.