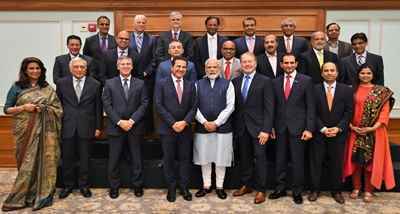 Prime Minister Narendra Modi has said that India stands for three Ds - Democracy, Demography and Dimaag. He said, that the target of the government is to ensure Ease of Living.

Members of the US India Strategic Partnership Forum, USISPF called on the Prime Minister in New Delhi yesterday. It was led by USISPF Chairman, John Chambers.

Mr. Modi spoke about the steps taken by the government to ensure ease of doing business like Reduction of corporate tax, labor reforms and the entrepreneurial risk-taking capacity of Indian youth.

The Delegation expressed faith in the vision of the Prime Minister and said that the next five years of India will define the next twenty-five years of the world.

A non-profit organization, USISPF aims at strengthening the India-US strategic partnership in the fields of economic growth, entrepreneurship, employment-creation, and innovation.

Union Minister for Commerce and Industries Piyush Goyal, while addressing the USISPF summit yesterday, said that Indo-US relationship is at their best ever now and trade relations between the two countries have a huge potential which is yet to be tapped. He said India and the US must look at a much larger agreement like a bilateral agreement.

On the trade talks between India and the US, the Minister said India, on the other hand, offers an attractive market to US businesses and skilled labor that can add value to American companies. Petroleum Minister Dharmendra Pradhan invited US businesses to deploy technology, capital, and new business models and participate in India’s biofuel revolution.

Speaking about India’s efforts towards de-carbonization, Mr. Pradhan said, India is expanding its footprints in carbon-free energy, including renewable and bio-energy.

He said technology and innovation can become game-changers for India's quest for de-carbonizing and developing into a gas-based economy for a cleaner and sustainable energy future. (AIR NEWS)