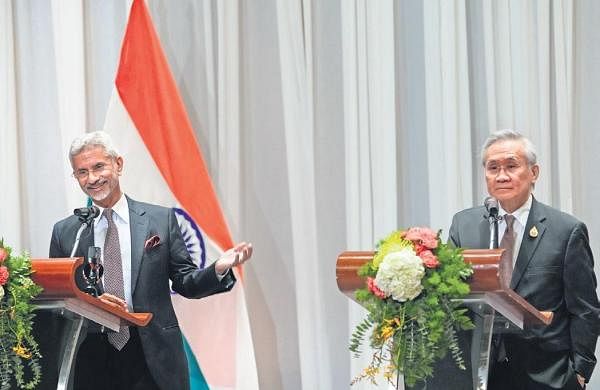 NEW DELHI: Trade between India and Thailand is close to $15 billion and it will rise further, External Affairs Minister Dr S Jaishankar said in Bangkok on Wednesday.

“Bilateral trade between India and Thailand is approaching $15 billion and this will increase. We are also looking at enhancing trade through the India-Myanmar-Thailand trilateral,’’ Jaishankar said while co-chairing the 9th India Thailand Joint Commission Meeting in Bangkok. Thailand’s Deputy Prime Minister and Foreign Minister, Don Pramudwinai, also took part in the meeting.

India has been pushing for the early completion and expansion of the India-Myanmar-Thailand trilateral highway (covering 1,400 km) to improve connectivity in the region. There have been talks of extending it to 3,200 km to connect Cambodia, Laos and Vietnam as well.

“The highway is a part of India’s Look East Policy that was replaced by Act East Policy in 2014 in to improve relations with ASEAN. The highway (which was conceptualised around 15 years back) would connect India’s border town of Moreh to Mae Sot in Thailand via Myanmar. A major part of the highway has been completed,’’ say sources.

He also called on Thailand’s Prime Minister Prayut Chan-o-cha. “Benefitted from his guidance on growing our bilateral relationship as we celebrated the 75th anniversary of diplomatic relations,’’ Jaishankar said.
Meanwhile, two memoranda of understanding (MoU) were signed between India and Thailand. “The first one was on health and medical research cooperation between the ministry of public health of Thailand and the family welfare department of India,’’ according to the foreign ministry of Thailand.

The second MoU was a collaboration on broadcasting between Prasar Bharati, India, and the Thai Public Broadcasting Service. Meanwhile, in an interaction with the diaspora, Jaishankar defended India’s decision to buy discounted Russian oil amid the Ukraine conflict.

“Oil prices are unreasonably high and so are the gas prices. A lot of traditional supplies to Asia are diverting to Europe because Europe is buying less oil from Russia,’’ he said. He added that it was his obligation and moral duty to ensure that the people in India get the best deal.