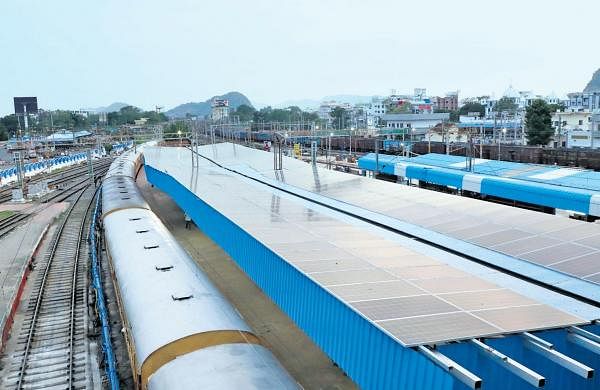 NEW DELHI: Indian Railways is working on an ambitious project to meet the energy requirements of nearly 7000 railway stations with solar power. Railway authorities said they are already successfully generating around 121.47 MW of solar power through their existing solar rooftop capacity installed in 1,094 railway stations across the country.

“We are working to equip all railway stations in the country with power generating rooftop solar panels,” a senior railway official said.

The 1,094 railway stations that have rooftop solar panel installations include major ones like Varanasi (redeveloped with all world-class facilities in UP), Katra in Jammu and Kashmir, New Delhi, Old Delhi, Jaipur, Secunderabad, Kolkata, Howrah, Guwahati among others.

Rooftop solar panels would be installed in nearly 7,000 railway stations across the country to meet their energy requirements.

A 3 MW solar power generating plant has already been set up at MCF in Raebareli while 2 pilot projects have been assigned to BHEL and the Railway Energy Management Company Limited (REMCL) at Bina in Madhya Pradesh and Diwana in Haryana, to generate 1.7 MW and 2 MW of solar energy respectively.

Apart from all this, another 50 MW plant is being set up on railway land in Bhilai by the Railways to generate enough solar power to meet the energy requirement of railway stations.

For the same purpose, the Railways has also already tied up with the Rewa Ultra Mega Solar – a joint venture of Solar Energy Corporation of India Limited (SECI) and the Madhya Pradesh government for obtaining solar energy to meet the energy requirement of railway stations.