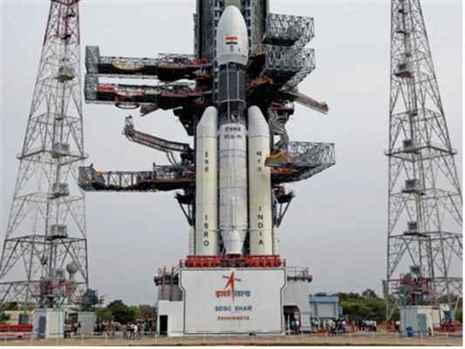 India's second moon mission Chandrayaan-2 left the earth's orbit early this morning and is moving towards the moon following the successful completion of a crucial manoeuvre by the Indian Space Research Organisation.

ISRO said, it has carried out the manoeuvre called 'Trans Lunar Insertion' at 2:21 AM, following which the spacecraft successfully entered the Lunar Transfer Trajectory.

Chandrayaan-2 is expected to reach the moon's orbit on August 20 and land on lunar surface on September 7. After 13 days of Moon-bound orbit phase, the lander 'Vikram' carrying rover 'Pragyan' will separate and after another few days of orbiting will soft land on September 7 in the South Pole region of the Moon, where no country has gone so far.

If successful, the mission will make India the fourth country after Russia, the US and China to pull off a soft landing on the Moon.

Following the landing, the rover will roll out from the lander and carry out experiments on the lunar surface for one lunar day, which is equal to 14 earth days. The mission life of the lander is also one lunar day, while the orbiter will continue its mission for a year.

According to the ISRO, the mission objective of Chandrayaan-2 is to develop and demonstrate the key technologies for end-to-end lunar mission capability, including soft-landing and roving on the lunar surface.

It also aims to further expand the knowledge about the moon through a detailed study of its topography, mineralogy, surface chemical composition, thermo-physical characteristics and atmosphere, leading to a better understanding of the origin and evolution of the moon.

In a giant leap for the country's ambitious space programme, ISRO's most powerful three-stage rocket GSLV-MkIII-M1 had launched the spacecraft into the orbit of the Earth on July 22 from the spaceport of Sriharikota, Andhra Pradesh.

The entry of Chandrayaan-2 in the new trajectory in space will make it closer to the lunar orbit than ever. The distance of about four lakh kilometres from the earth to the moon-centric orbit will now be covered in just seven days.

This method of initially orbiting the earth and then gradually increasing the distance using a series of manoeuvres and finally reaching the moon is considered the most cost-effective method, though the mission takes a bit longer time.

A few more complex tasks in the Chandrayaan-2 mission are ahead for the national space agency ISRO. Its successful trans-lunar ion just a day ahead of the Independence Day marks its yet another important phase.

The space research activities were initiated during the early 1960’s in India. With the live transmission of Tokyo Olympic Games across the Pacific by the American Satellite, Dr. Vikram Sarabhai quickly recognized the benefits of space technologies for the country.

In 1967, the first Experimental Satellite Communication Earth Station located was operationalized. Later, a TV programme on agricultural information to farmers Krishi Darshan was started, which received good response. The next logical step in this direction was the Satellite Instructional Television Experiment (SITE).

Now, with ISRO successfully carrying out the final orbit raising manoeuvre of Chandrayaan-2 spacecraft, India's on-going space exploration programme has taken its next step in its journey. (AIR NEWS)