International Yoga Day celebrated across the country and abroad 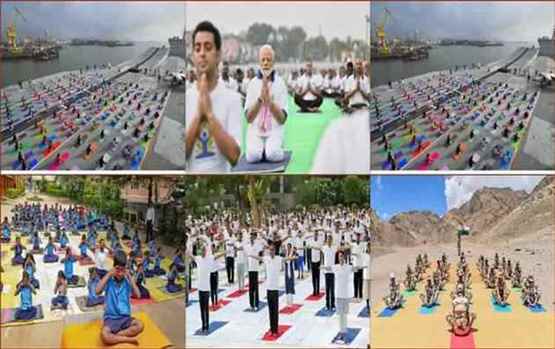 The fifth International Yoga day was celebrated across the country and abroad today.

The main event was held at Prabhat Tara Ground of Ranchi, in Jharkhand this morning where Prime Minister Modi performed various Yoga postures along with around 30 thousand enthusiasts.

Speaking on the occasion, Mr Modi called for making yoga an integral part of life. He said, in today's changing times, the focus should be on wellness as well as protection from illness.

The Prime Minister said, in the last five years, Government has integrated yoga with health and wellness to make it a pillar of preventive health care.

Mr Modi stressed on the need to take modern yoga to the rural and tribal areas. He said, yoga is above all and unites people irrespective of religion, caste, creed and society.

President Ram Nath Kovind participated in the Yoga day programme at the Rashtrapati Bhavan. Mr Kovind said, yoga is India's gift to humanity and it holds the key to healthy living and maintains a fine balance between mind and body.

Talking to media persons, Information and Broadcasting Minister said, Yoga has become a mass movement all over the world.