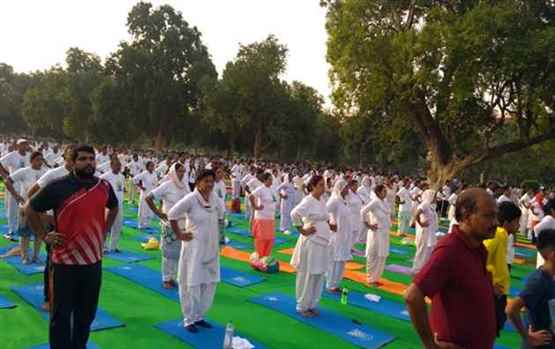 On the occasion of the 5th International Day of Yoga, mass yoga demonstration programmes were held at various places in the national capital. President Ram Nath Kovind participated in the Yoga day event organised at the Rashtrapati Bhavan. Speaking on the occasion, Mr Kovind said, yoga is India's gift to humanity and it holds the key to healthy living and to that fine balance between mind and body.

Mr Naidu said Yoga is now widely recognized as a means to achieve and maintain physical fitness and health. He said, Yoga is not just a form of physical exercise to be practised for a few minutes every day but it is a holistic discipline which leads to a healthy state of mind, robust body and complete well-being of an individual.

Speaking on the occasion, Defence Minister Rajnath Singh said that yoga spreads the message of humanity and harmony and it can not be linked with any religion. He said, yoga is integrating the world and it has now become the lifestyle of people. Later speaking to media, Information and Broadcasting Minister Mr Prakash Javadekar said, Yoga has become a mass movement all over the world. He said, yoga should be part of life as it brings wellness, prosperity and peace.

External Affairs Minister Dr S Jaishankar participated in the International Day of Yoga event with the diplomatic corps and his Ministry officials at the Pravasi Bharatiya Kendra in New Delhi. IT and Law Minister Ravi Shankar Prasad and Minister of Railways Piyush Goyal attended Yoga Day Celebrations at Lodhi Gardens.

Mass Yoga Demonstration Programme was also held at the All India Institute of Medical Sciences where doctors led by Director Randeep Guleria practised Yoga. Some of the participants in the Yoga Day event at Rajpath spoke to us about their experiences and benefits of Yoga. (AIR NEWS)