ISRO successfully launches Oceansat-3, 8 other customer satellites on their way to different orbit 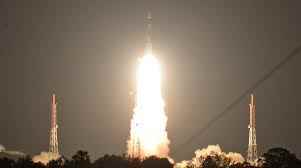 In its 56th flight, India's workhorse PSLV lifted off from the first launchpad in Satish Dhawan Space Centre at 11.56 am. It was a near-perfect launch, although cloudy weather obstructed the view of the onlookers.

This mission is special in the sense the scientists will be conducting several manoeuvres to place the satellites in different orbits at different altitudes. It is also one of the longest missions undertaken by ISRO. The total mission duration is around 2 hours.

The primary satellite EOS-06, which is the third-generation satellite in the Oceansat series, was placed in orbit-1 after 17 minutes from lift-off at an altitude of 742 km. Subsequently, orbit change was made by using two Orbit Change Thrusters (OCTs) introduced in the Propulsion Bay Ring of the PSLV-C54 Vehicle to place the passenger payloads (4 foreign and 4 domestic) in orbit-2, which is a much lower ordit. The last satellite will be lobbed at an altitude of 528 km.

ISRO Chairman S Somanath said, "The primary satellite has been successfully placed and solar panels deployed. The mission is not yet completed. We are waiting for the change of orbit of the upper stage along with the eight remaining satellites. The upper stage has small engines which will lower the orbit from 742 km to 511 km, which again will be a Sun Synchronous Polar Orbit." SR Biju, Mission Director, said the first phase of the mission is completed.

Thenmozhi Selvi K, Project Director, EOS-06 Satellite, said: "The objective of the Oceansat-3 was to study the biological parameters of the ocean. This is having advanced payload specifications and application areas. It will be an operational class spacecraft with complete redundancy and has five years of mission life."

The ISRO said the previous satellite in the series, Oceanset-2, launched in September, 2009, was configured to cover global oceans and provide continuity of ocean colour data with global wind vector and characterisation of lower atmosphere and ionosphere. The mission resulted in many research collaborations nationally and internationally on various areas like chlorophyll distribution, ocean colour images and oil spillages.