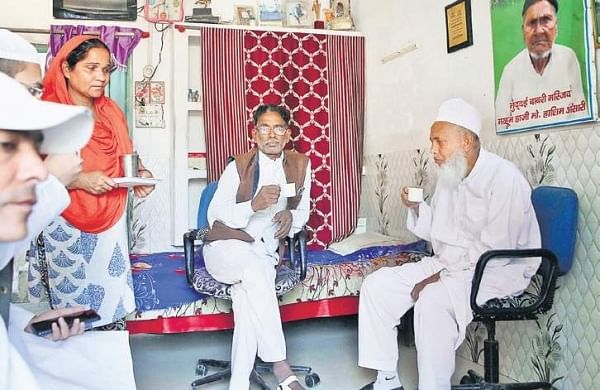 AYODHYA: Iqbal Ansari, who was a litigant in the Ayodhya land dispute case, has received an invitation to attend the foundation ceremony of Ram temple in Ayodhya on August 5, where Prime Minister Narendra Modi and other dignitaries will also remain present.

Accepting the invitation, Ansari said that he believed that it was the wish of Lord Ram that he received the
invitation for 'Bhoomi Pujan'.

"I will welcome the Prime Minister as he is coming to lay the foundation stone of Ram temple. I will present him the Ramcharitmanas, the holy book of Hindus, with a stoll with the name of Lord Ram on it."

Iqbal Ansari, who is the son of Hashim Ansari who was the original litigant in the case, has received the invitation number 146 for the event where only 200 VVIPs are being invited.

Claiming that after Supreme Court’s verdict in the case on November 9, 2019, there is no ill-feeling amongst anyone against any religion in Ayodhya, Ansari said: "All religions are equally respected in yodhya which was an epitome of Ganga-Jamuni-Tehzeeb. May be, it was the wish of the Lord Ram that is why I have been invited for the event. There is no difference between the Hindus and Muslims residing in Ayodhya. The matter has now been resolved by the Supreme Court."

Strict security arrangements have been put up in Ayodhya. The local administration have been asked to implement strict coronavirus safety protocols.

Meanwhile, just two days before Prime Minister Narendra Modi's visit to Ayodhya to lay the foundation stone for the construction of Ram Temple, another priest at Ram Janmabhoomi has tested positive for COVID-19.

Chief Priest Acharya Satyendra Das has tested negative for COVID-19, however, he has been kept away from the Puja as of now.

Earlier, an assistant priest Pradeep Das along with four security personnel posted at the Ram Janmabhoomi had tested positive along with 15 cops deployed on RJB complex.