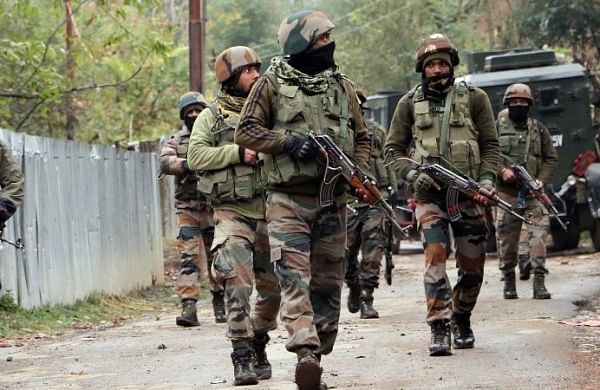 JAMMU: Two more soldiers, including a Junior Commissioned Officer (JCO), were killed as the massive search operation to track down terrorists continued for the sixth day in the forest areas of Jammu and Kashmir's twin border districts of Poonch and Rajouri on Saturday, officials said.

With the latest killings, a total of nine Army personnel, including two JCOs, have laid down their lives in the ongoing counter-insurgency operation that began in Surankote forests of Poonch on Monday and later spread to nearby Thanamandi in Rajouri and Mendhar in Poonch.

The officials said bodies of the JCO and the soldier were recovered near the scene of Thursday's gunfight with terrorists in the Nar Khas forest in Mendhar, taking the number of Army personnel killed in the operation to four.

A defence spokesman identified the JCO as Ajay Singh and another soldier as Naik Harendra Singh and said they were part of search operations launched by the security forces to flush out terrorists hiding in the densely forested area on Thursday.

"After a fierce firefight with terrorists, the communication with the two soldiers was disrupted.

Relentless operations continued to neutralise the terrorists and to reestablish communication with them," the spokesman said.

There was another exchange of fire between the Army's search parties and the fleeing terrorists in the adjoining Thanamandi forest in Rajouri the same day but the ultras managed their escape.

"The presence of terrorists in the forest area connecting Poonch and Rajouri was observed two and a half months ago and accordingly tactical operations were launched to track them down," Deputy Inspector General of Police, Rajouri-Poonch range, Vivek Gupta told reporters.

He said the area is mountainous and the forest is dense, which makes the operation difficult and dangerous.

"The joint security grid was tracking different groups of terrorists but operations take time, depending on the topography of the area.

"The contact with the terrorists was established on three occasions this week, based on the intelligence inputs," the officer said.

Gupta said the forest area is being sanitised and once the operation is complete, a clear picture will emerge.

"The terrorists are holed up and the joint forces are on the job to take the operation to the logical conclusion as per the Standard Operating Procedure," he said.

However, he did not disclose the number of terrorists hiding in the forest area.

"We have the number and have formed our strategy accordingly."

The officials said gunshots were heard intermittently throughout the day as the joint search parties of the Army and the police resumed the operation in Poonch's Mendhar area.

They said the entire forest area from Mendhar to Thanamandi remains under a strict cordon and a massive search operation is on to neutralise the terrorists who are moving from one place to another in an attempt to escape the dragnet.

The Army has already deployed para-commandos and a helicopter was also seen hovering over the forest area to keep surveillance, the officials said.

They said the traffic between Mendhar and Thanamandi along the Jammu-Rajouri highway remained suspended for the second day in the wake of the ongoing operation.

Rajouri and Poonch in the Jammu region have witnessed a rise in infiltration attempts since June this year, resulting in the killing of nine terrorists in separate encounters.

Earlier in the day, a defence spokesperson said the mortal remains of riflemen Negi and Singh were flown to Uttarakhand in a service aircraft Saturday morning after a wreath-laying ceremony.

The aircraft will reach the Jolly Grant Airport in Dehradun by 11.30 am, he said.

From the airport, the mortal remains of the soldiers will be taken to their hometowns by road and their last rites will be conducted with full military honours, the spokesman said.