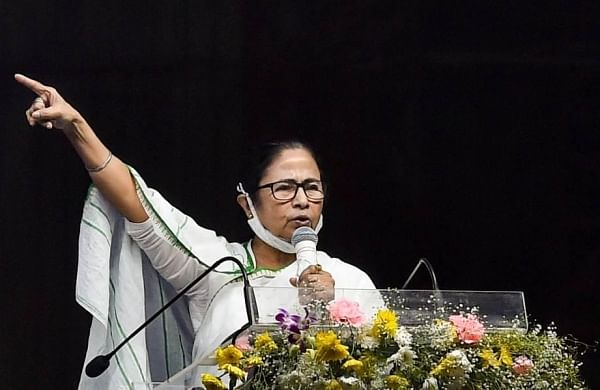 KOLKATA: Trinamool Congress workers staged demonstrations in several districts of West Bengal on Sunday in protest against the "insult" of Chief Minister Mamata Banerjee during a programme at Victoria Memorial, where she was greeted with 'Jai Shri Ram' chants.

TMC supporters reportedly raised slogans against the BJP and burnt tyres on streets in Birbhum, Hooghly and West Burdwan.

Singer and former TMC MP Kabir Suman was also seen holding a placard that read 'Jai Bangla' at Gariahat in the metropolis.

The 125th birth anniversary celebrations of Subhas Chandra Bose in the state had ended in abject bitterness on Saturday when Chief Minister Mamata Banerjee refused to deliver her speech at the main 'Parakram Diwas' event at Victoria Memorial, after 'Jai Shri Ram' slogans greeted her.

"Never have I been prouder to be part of Mamatadi's team. In an ocean of monkeys, she stands out as the lone lioness," TMC MP Mohua Moitra said in a tweet on Sunday.

The party on Sunday also expressed regret over Prime Minister Narendra Modi's "silence" on the "reprehensible treatment" meted out to Banerjee.

ALSO READ | 'Jai Shri Ram' chants to her is like red rag to a bull: Anil Vij takes potshot at Mamata

"Prime Minister Narendra Modi, who was present at the programme, did not utter a single word condemning the behaviour of a section of audience. This shows that the BJP has no respect for Netaji and has no idea what he stood for," he claimed.

The chief minister on Saturday declined to speak at an event, organised to celebrate Netaji Subhas Chandra Bose's 125th birth anniversary, after "Jai Shri Ram" slogans were raised there, in the presence of Modi.

The TMC MLA claimed that "a dark fascist force" was trying to grab power in West Bengal, and alleged that freedom of expression would be under stake, if it gets to seize control.

"Please don't allow this force to take control of Bengal. It will do away with our freedom of expression. People of different ideologies are free to air their views in Bengal. That would all come to end," Basu said, after popular Bengali actress Kaushani Mukhopadhay and the chairperson of Eastern India Motion Pictures Association, Piya Sengupta, joined the ruling camp at the meet.

"An ugly force is now out to throttle the voice of all artistes in the country. Director Anurag Kashyap and actor Naseeruddin Shah have already got a taste of it," he underlined.

Sengupta and her daughter-in-law Mukhopadhyay said they have always been inspired by the "pro-people approach" of the TMC supremo, and vowed to serve the people of the state.

Among others, TMC spokesperson Kunal Ghosh was also present at the hastily called press meet.

Two days ago, popular actor Sourav Das joined the TMC, while actor Rudranil Ghosh, who was close to the CM till recently, was seen rubbing shoulders with saffron camp leaders, of late, fuelling speculation that he might switch sides.

Meanhwile, Governor Jagdeep Dhankhar on Sunday said Netaji Subhas Chandra Bose stood "too tall among us" and there should not be any attempt to "belittle the maker", amid the controversy over Chief Minister Mamata Banerjee's refusal to speak at an event for celebrating Netaji's birth anniversary when a section of the audience shouted 'Jai Shri Ram'.

In a series of tweets on the microblogging site, Dhankhar cautioned against any attempt of creating din on the legacy of the great patriot.

"There cannot be any room for creating noise on legacy #NetajiSubhasChandraBose. Such attempt will only belittle the maker & be irrelevant."

"Netaji all through thrived for unity of country. He stands too tall amongst us. Lets dump any ulterior thinking on this great occasion," the governor tweeted.