Jammu & Kashmir tunnel collapse: Bodies of all 10 labourers pulled out in Ramban district 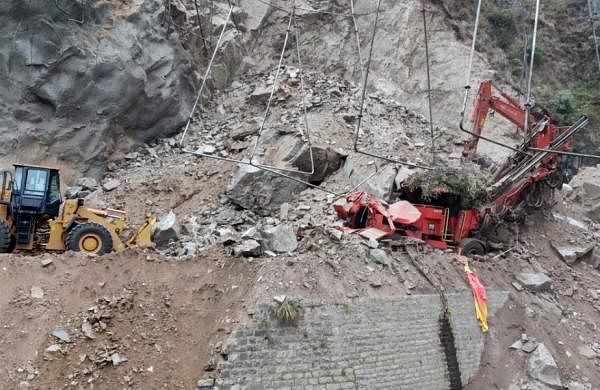 SRINAGAR: Bodies of all the 10 labourers trapped under the debris of an under-construction tunnel
on Srinagar-Jammu national highway have been pulled out.

The rescue operation launched by NDRF, SDRF, police, Army and local administration after the collapse of the under-construction tunnel at Khooni Nallah on Srinagar-Jammu highway in Ramban district continued for the second consecutive day on Saturday.

Ten labourers were trapped under the debris while three others were rescued after the collapse of the tunnel on Thursday night. The teams pulled out bodies of all the 10 trapped labourers from the debris by Saturday evening.

Body of one labourer was recovered on Friday while bodies of nine others were pulled out on Saturday. Deputy Commissioner (Ramban) Mussarat Islam said the bodies have been shifted to a government hospital for identification and other legal formalities.

Of the 10 deceased labourers, five were from West Bengal, two from Nepal, one from Assam and two were locals. Strong winds, dust storm and landslides had hampered the rescue operation. No inquiry has been ordered by the administration into the tunnel collapse so far.

The DC further said an immediate ex gratia of Rs 25,000 from the Red Cross fund and Rs 25,000 from the company is being given to kin of two local labourers, who are believed to have died in the incident. Former MLA and senior CPM leader Mohammad Yousuf Tarigami demanded a judicial probe into the accident and Rs 40 lakh compensation for the kin of the deceased .