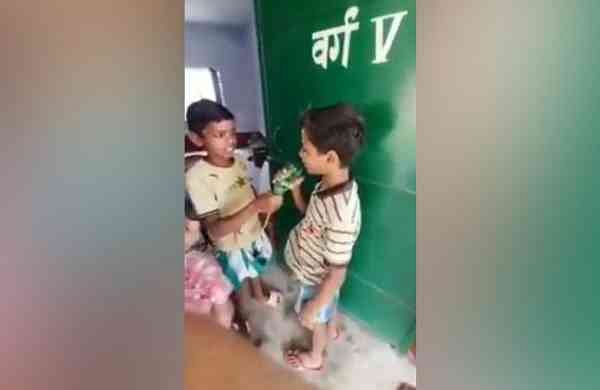 RANCHI: A 12-year-old student in a government school in Godda, who turned to be a reporter, through his journalistic skills exposed the dilapidated condition of his school by making a live video on social media. He was allegedly threatened by his teachers for this act.

Sarfaraz Khan was seen reporting with a plastic bottle fitted with a bamboo stick, resembling a mic carried by TV journalists, and exposing the sorry state of the education system in his school at Bhikhiyachak Primary School under Mahgama Block in Godda. He requested Chief Minister Hemant Soren to dismiss the teachers from school.

In the video, which went viral on social media, Sarfaraz is saying – “Now, I will show you the condition of the upgraded primary school in my village.” In the video, Sarfaraz could be seen questioning his partner fluently about the teachers, why students do not come to school and several other issues related to
school without any hesitation.

Sarfaraz keeps on showing the dilapidated condition of the school building…. “Teachers are absent in the school. Big trees have grown up on its premises. There is no drinking water facility and no toilet. Cattle fodder is kept in the classroom.”

Sarfaraz told that he was threatened by the school staff to refrain from such activities or he will have to face dire consequences.

“There is no teacher in this school. After I made this video which went viral on social media, school staff came to my residence and threatened us,” said Sarfaraz Khan.

“One of the teachers Md Tamizuddin came to my home and threatened my parents that they will lodge a complaint against me. I request Chief Minister Hemant Soren to remove him from the school as he is coming to the school only to make their attendance,” said Sarfaraz.

However, he said that he is not deterred from such threats and will keep exposing such things in future also.

Sarfraz further added that the condition of the school was not like this in the beginning, but it got deteriorated later due to the negligence of the school staff.

Interestingly, after the video went viral on social media, the school building has been cleaned and the District Education Officer Rajni Devi recommended the suspension of two school teachers posted there.

School Education and Literacy Minister also called up the child reporter and asked whether he should suspend the teacher, to which Sarfaraz replied, “Yes, that would be fine.”

“Sarfaraz wants to become a journalist when he grows up but teachers in his school did not like it and suggested him to refrain from such activities. When I was informed about it, I directed the District Education Officer to relieve both the assistant teachers -- Md Tamizuddin and Md Rafique-- from duty,” tweeted Education Minister Jagarnath Mahto.