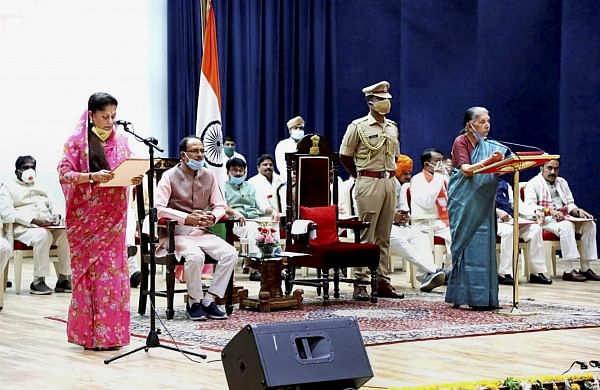 The limited gathering at the Raj Bhawan, which witnessed the oath-taking ceremony, included newly-elected BJP Rajya Sabha member Jyotiraditya Scindia, whose smile tell-told his strong imprint on the expanded team.

Twelve of the 28 ministers sworn in on Thursday were out of the 22 Congress MLAs, whose resignation from the Vidhan Sabha in March (following Scindia quitting the Congress to join the BJP on March 10) had scripted the fall of the Kamal Nath-led 15-months-old Congress government on March 20.

The 12 ministers are Imarti Devi, Mahendra Singh Sisodiya, Prabhuram Chaudhary, Pradumn Singh Tomar (who were ministers in the Congress government also), Rajvardhan Singh Dattigaon, Suresh Dhakad, OPS Bhadoria, Brijendra Singh Yadav and Giriraj Dandotiya. It also included Aidal Singh Kansana, Bisahulal Singh and HS Dang – the three other Congress MLAs who too had quit the Vidhan Sabha and joined the BJP over not being made ministers in the Kamal Nath government. Both Kansana and Singh have been ministers in previous Congress governments led by Digvijaya Singh.

With two Scindia loyalists – Govind Singh Rajput and Tulsi Silawat – already being part of the six member cabinet, the number of Scindia loyalists in the expanded 34-strong council of ministers has grown to 11, while the total number of breakaway former Congress MLAs in the new team is 14.

And it was not only Scindia who had his imprint on the expanded ministerial team, as the Gwalior-Chambal region from where he comes from had the maximum 12 inductees in the new team, including three core BJP MLAs – Bharat Singh Kushwah, Scindia’s aunt Yashodhara Raje Scindia and Arvind Bhadoria.

What could be more concerning for Chouhan is that only three of the ministers inducted on Thursday, including Bhupendra Singh, Arvind Bhadoria and Jagdish Devra can be counted among his loyalists. His other loyalists, including Rajendra Shukla, Surendra Patwa, Rampal Singh, Sanjay Pathak, Paras Jain and Gourishankar Bisen couldn’t find place in the expanded team.

While Chouhan managed to get at least three loyalists in the team, BJP national general secretary Kailash Vijayvargiya couldn’t get his man, the Indore-II MLA Ramesh Mendola into the council of ministers, despite all efforts.

With Thursday’s expansion, the Chouhan-led council of ministers is now 34-strong (including the CM also) and only one vacancy is left to be filled.

Importantly, the resignation by 22 Congress MLAs in March 2020 had scripted the fall of the Kamal Nath government on March 20, a day after which Shivraj Singh Chouhan was sworn in as the new CM of the state.

Taking a dig at the expanded council of ministers, former CM and state Congress president Kamal Nath tweeted “Perhaps for the first time in the history of democracy, 14 out of the 33 ministers are former MLAs. This is a mockery of constitutional arrangements as well as the people of the state.”