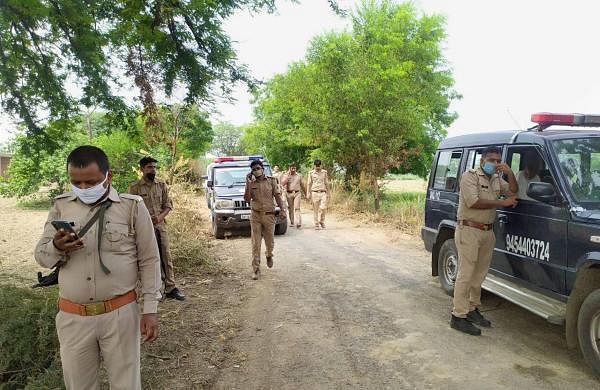 KANPUR: With dreaded criminal Vikas Dubey still elusive after two days of the firing incident in which eight cops had lost their lives, UP police arrested one of the accused and close aide of the wanted gangster after a gunfight in Kalyanpur area in Kanpur city on Sunday at 4:40 am.

As per the police sources, Daya Shankar Agnihotri alias Kallu, 42, a close aide of Dubey, sustained a bullet injury in his right left knee in the retaliatory firing by the police team.

He is one of the 18 aides of Dubey named in the FIR lodged in connection with the killing of cops.

Notably, eight police personnel, including a circle officer in the rank of Deputy Superintendent of Police, three sub-inspectors and four constables were martyred during a past midnight operation against Dubey in Bikru village under Chaubepur police station area in Kanpur on past Thursday midnight.

Dubey, who is still away from police net, has around 60 criminal cases lodged against him.

Besides, seven police personnel were left injured with one being critical in the operation which was launched to nab the dreaded criminal in connection with the case of attempt to murder lodged by one Rahul Tiwari.

The sources claimed that Agnihotri opened fire at the police team chasing him on wee hours on Sunday. Police have recovered a gun and cartridges from Agnihotri’s possession, it reported.

However, in a video going viral on social media, Agnihotri is shown hinting at the role of local Chaubeypur police station in alerting the don about the approaching police teams with an intention to nab him.

He has conceded in the video clip that there was a call to Dubey from police station about the police action.

The highly placed sources claimed that Dayashankar, husband of Dubey’s maid Rekha, disclosed after getting the information about imminent police action, Dubey had called in shooters to his house from outside the village.

However, the police sources said that the cash reward on Dubey was increased to Rs 1 lakh and a fresh cash award of Rs 25000 was announced on the arrest of his aides.

As per Kanpur IG Mohit Agarwal, 10 close aides of Dubey were named along with the don himself in the FIR lodged in the case of cops’ massacre.  Moreover, around 60-70 unidentified persons were also booked in the case.