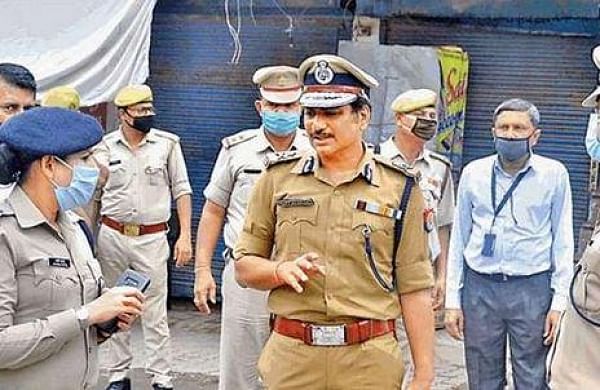 KANPUR: Setting an example, Inspector General of Police (Kanpur range), Mohit Agarwal, got himself challaned for not wearing a mask in public.

Agarwal asked the Station House Officer (Barra), Ranjeet Singh, to fine him for stepping out without wearing a mask.

The SHO made the challan and handed over a copy to the IG who paid Rs 100 as fine on the spot.

Agarwal later told PTI that he had gone to Barra on Friday for inspection and had stepped out of his vehicle without a mask.

I had discussion with the subordinates including circle officers and later realised my mistake that I was not wearing mask, the IG added.

"I immediately took out my mask from my official vehicle and put it on," he said.

But I felt it was ethical to get myself challaned and fined to set an example for police and public, he said.

The state government has levied a fine of Rs 100 would be levied on those not wearing face covers in public.

This was part of its measures to prevent the spread of COVID-19, the IG said.

The top brass of the state had also announced that they would strictly enforce the use of face masks by people.

It was also announced that any person disobeying the direction would be deemed to have committed an offence.