Kashmiri leaders did not lose their own to terrorism: Governor 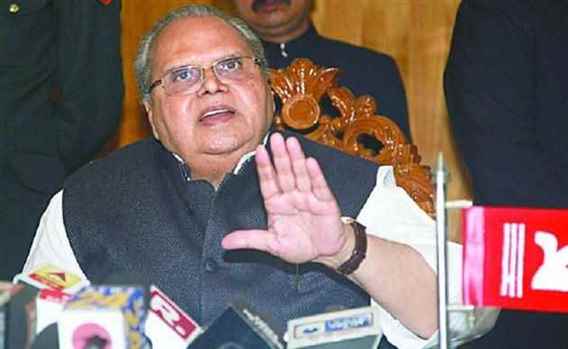 Jammu and Kashmir governor Satya Pal Malik on Tuesday put leaders of the Hurriyat, mainstream parties and religious preachers in Jammu and Kashmir in his line of fire for using their influence to get the children of ordinary Kashmiris killed while none of them lost their own to terrorism.

“Whoever he is – a Hurriyat leader, a Maulvi, or a mainstream political leader, none of them have lost their children to terrorism. All their children are studying abroad and are well settled. They have only misled the children of the common people to get them killed in the name of Allah and Jannat,” he said at the convocation of Shri Mata Vaishno Devi University in Katra near Jammu.

“These leaders, politicians, bureaucrats, affluent and powerful shattered so many dreams and ruined the lives of several youths. These social, religious leaders, clerics, Hurriyat or mainstream leaders over the years have incited children of common people to get them killed but neither a single child of theirs has died nor have joined militancy.

But the children of common people were incited in the name of Allah and Jannat. Aam Admi ko Jannat ka rasta dikhaiye aur marwa dijiye, ye hota raha hai. (The children of commoners are shown way to paradise to get them killed.) This is what has been going on in Kashmir for the past so many years,” he asserted.

Malik urged the civil society and the youth of Kashmir to understand the nefarious designs of such people.

“The most beautiful part of the world is with you. Be masters of your destiny. Delhi won’t take it away. In fact, Delhi has opened its coffers for Jammu and Kashmir. So, be part of the development and tread the path of progress,” he said.

Malik also took a jibe at successive governments in the state saying, “Had the funds sent by the Centre over the years been used properly, the roofs of the houses in the state would have been of gold.” The governor said that last year he had sanctioned 53 degrees colleges and 50 more were being opened.

On August 5, Centre abrogated Article 370 which had guaranteed special status to Jammu and Kashmir. In another significant move, the Centre bifurcated the state into two union territories — Jammu and Kashmir and Ladakh.

On October 31, the two UTs will officially come to existence. The post-Kashmiri leaders did not lose their own to terrorism: Governor appeared first on Telugu Bullet.