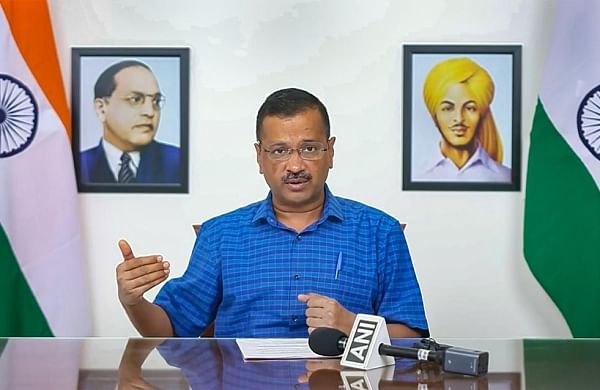 NEW DELHI: The Delhi BJP Monday accused Chief Minister Arvind Kejriwal of trying to "scare and blackmail" people over the civic bodies' anti-encroachment drive, and said the city's bona fide residents will not be harmed even if they live in unauthorised colonies or slum clusters.

However, Bangladeshis, Rohingyas, rioters and those involved in illegal activities, "who are protected by the Aam Aadmi Party", will not be spared, he said.

His statement came after Kejriwal claimed at a press briefing that the BJP-ruled municipal corporations have planned to demolish houses and shops which are considered illegal, and that will render 63 lakh people homeless.

In response, Delhi BJP president Adesh Gupta addressed a press conference, accusing Kejriwal of "simply feigning ignorance", and "lying, once again". "Kejriawal has expressed his pain so I want to assure that no Bangladeshis, Rohingyas, rioters and those involved in illegal activities and who are protected by AAP, will be spared," he said.

But no bona fide Delhiite living in unauthorised colonies or slum clusters needed to worry as the BJP and the Modi government stand with them, he said.

Kejriwal does not want to face the truth over the anti-encroachment drive, he said. "Once again, Kejriwal has tried to scare the people of Delhi. This blackmailing will not continue Kejriwal ji, people know how big a liar you are! There are not 63 lakh houses in Delhi as you have claimed," he said.

The Modi government has given ownership rights to 40 lakh people in uanuthorised colonies, which the AAP could not do despite being in power for over seven years, he said.

"The Kejriwal government kept the file for regularisation of unauthorised colonies and Jahan Jhuggi Wahan Makan scheme files for 3-4 years," he charged. He said the BJP helped people and worked for the development of the city during the party's 15-year rule in the three municipal corporations.

Gupta also charged that AAP MLAs and volunteers were demanding money from people by "scaring them and promising help" in saving their houses from demolition.

"I have received complaints from Paschim Vihar and Burari. AAP MLAs are indulged in this reprehensible thing asking volunteers of the party to go to people to tell them that their houses will be demolished and demand money from them to save them," he alleged.

Gupta charged the Kejriwal government sat over the 'Jahan Jhuggi Wahan Makan', or in-situ slum rehabilitation, scheme for four years, before the Centre took it forward and readied 15,000 houses so far.

In his press conference earlier, Kejriwal had slammed the anti-encroachment drive being carried out in various parts of the city by the BJP-ruled municipal corporations, saying if bulldozers raze shops and houses of 63 lakh people in Delhi which are considered illegal it will be the "biggest destruction" in independent India.

At a meeting with Aam Aadmi Party MLAs on the matter, he told them that they should oppose the anti-encroachment drive even if that meant going to the jail.