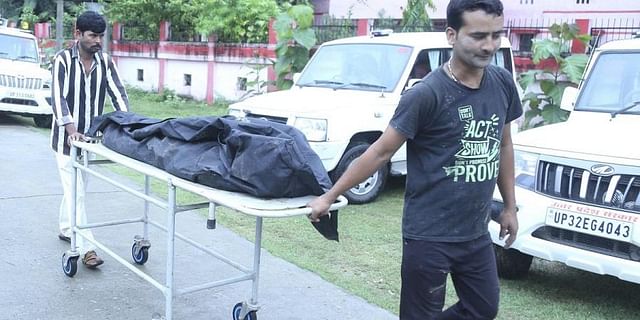 LUCKNOW: Following the submission of chargesheet by the Special Investigation Team (SIT) against all six accused of rape and murder of two minor sisters in Lakhimpur Kheri on September 14, the POCSO court framed the charges in the case listing it on priority for day-to-day hearing on Friday.

The SIT probing the sensational rape and murder of two sisters belonging to Scheduled Caste (SC) in Tamolinpurwa village under Nighasan police station area in Lakhimpur Kheri district, completed its investigation within a fortnight and filed the chargesheet in the POCSO court of special judge Mohan Kumar on Thursday.

It may be recalled two minor sisters, aged 17 and 15 years of age, were found hanging from a tree in a sugarcane field in village Tamolinpurwa in Nighasan area of Kheri late on September 14, this year. The girls were studying in Class 10th and class 8th.

According to special public prosecutor Brijesh Pandey, the court framed the charges against the accused on Friday.

Pandey said in the 325-page chargesheet, three of the six accused, namely prime accused Junaid, Suhail and Hafizurrehman, had been charged under Sections 452 (house-trespass for causing hurt), 323 (voluntarily causing hurt), 302 (murder), 376DA (gang rape), 364 (abduction for murder), 201 (causing disappearance of evidences of offence) and Section 34 (acts done by several persons in furtherance of common intention) of IPC, Sections 3 to 5A of SC/ST Act and sections 5G/6 of POCSO Act.

He said another main accused Chhotu aka Sunil was charged under the same sections as Junaid, Suhail and Hafizurrehman, barring the charge under SC/ST Act.

Pandey informed that the investigators charged two others -- Karimuddun alias DD and Chhotey alias Arif -- under Sections 201 (causing disappearance of evidences of offence), 34 of IPC and Sections 3 to 5 of SC/ST act.”

With the submission of chargesheet by the SIT, all the six accused were produced in court and proceedings to provide them copies of the charge-sheet were carried out.

It may be recalled that all the six accused were arrested on the next morning of the incident. Chhotu Gautam alias Sunil was the first one to be arrested in the case. On the tip off given by Chhotu, who had allegedly introduced the girls to the accused Junaid and Suhail some six months back, the police nabbed other culprits.

As per the police sources, during interrogation, the accused admitted that the two girls had met them outside the village. While Junaid took them on his mobike, Suhail and Hafizurrehman followed them on foot. Junaid and Suhail reportedly admitted to rape of the two minors while Hafizurrehman stood guard. Later when the girls asked Junaid and Suhail to marry them, both refused and a big altercation among them followed.

The sources also added that the accused allegedly admitted to the interrogators that finally Suhail and Hafizurrehman strangulated the girls who died on the spot and called their accomplices -- Arif and Karimuddin—to manage the scene. All five then hanged the girls with the tree to project it as a suicide, said the police sources.

Meanwhile, the district authorities transferred the remaining 50% monetary aid of Rs. 8,25,000 into the bank account of the mother of the two deceased girls. Half of the compensation of Rs 8,25,000 had been transferred on September 15, following the registration of FIR as per provisions of SC/ST Act. (THE NEW INDIAN EXPRESS)