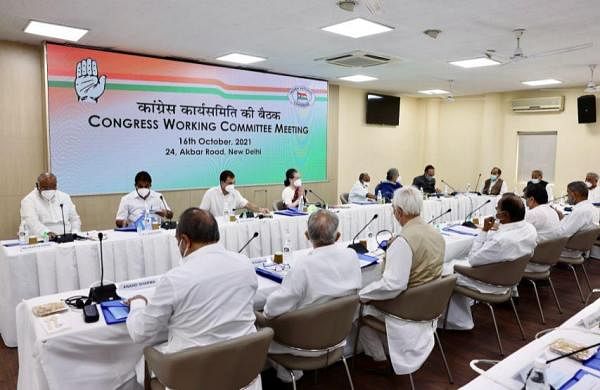 NEW DELHI: The Congress on Saturday said the "brutal" mowing down of farmers in Lakhimpur Kheri was a manifestation of the government's continuing "arrogance" and slammed Prime Minister Narendra Modi for not removing the Union minister whose son has been arrested in connection with the incident.

The Congress Working Committee (CWC), the party's highest decision-making body, in a resolution alleged that the last seven years have witnessed a "diabolical design" to attack the livelihood of 'annadatas' and landless farm labourers.

Referring to the October 3 Lakhimpur Kheri violence in which eight people died, four of them farmers allegedly knocked down by a vehicle carrying BJP workers, the CWC said that "the brutal mowing down of farmers is a manifestation of the continuing arrogance".

"This incident was preceded by the Union minister (of state) for home affairs, himself an accused in a case of murder in which the high court has reserved judgment for 43 months, publicly threatening the farmers with dire consequences, while flaunting his own dubious antecedents," the Congress said.

Despite his son having been accused and arrested under relentless public pressure, Prime Minister Narendra Modi "shamelessly" refuses to remove Ajay Mishra as Union minister of state for home affairs, it said.

On October 3, after the four farmers were knocked down, infuriated people then allegedly lynched some people in the vehicles.

The other dead included two BJP workers and their driver.

In the incident, a journalist was also killed.

Farmers claimed that Union Minister Ajay Mishra's son Ashish Mishra was in one of the vehicles, an allegation denied by him and his father who say they can produce evidence to prove he was at an event at that time.

Ashish Mishra 'Monu' was arrested in the case on October 9 after 12 hours of questioning, and a court has accepted his police custody from October 12 to October 15.

In its resolution, the Congress said it is committed to the repeal of the three farm laws and ensuring a just and fair minimum support price mechanism for India's farmers as well as justice for landless farm labourers.

"We reiterate our continued resolve to fight this battle alongside farmers and farm labourers to defeat the Modi government's deliberate attack on India's 'annadatas'," the CWC said.

The party alleged that the "attack" on farmers began with a sinister design to deny the land acquisition compensation guaranteed by the Congress led-UPA through an Act of Parliament.

This was followed by a refusal to provide any form of relief from agricultural indebtedness, a dilution of the norms for crop compensation and the framing of a convoluted crop insurance scheme which singularly benefitted select insurance companies instead of the suffering farmers, the resolution said.

Agriculture was subjected to unjustifiable levels of taxation by imposing Goods and Services Tax (GST) on fertiliser (five per cent), pesticides (18 per cent) and tractors and agricultural equipment (12 per cent-18 per cent), it said.

This was compounded by astronomical increase in diesel prices that are touching an unprecedented Rs 100 per litre and have even surpassed the Rs 100 per litre mark in several cities across the country, the resolution said.

All these retrograde and outright anti-farmer measures, including excessive taxation by the Modi government, have placed an additional burden of Rs. 20,000-25,000 per hectare on agriculture, it claimed.

For over ten and a half months, lakhs of farmers have been protesting peacefully on Delhi's borders, blocked by spikes and boulders on the national highway from advancing further, it said.

The CWC also noted the "courage and consistency" with which Rahul Gandhi has fought for the cause of farmers and the "resilience" of Priyanka Gandhi Vadra in fighting the onslaught on farmers in Uttar Pradesh.

In another resolution on the political situation in the country, the CWC said the tragic incident at Lakhimpur Kheri is a clear example of official support to the attempt to suppress the voice of the farmers.

The refusal of the prime minister to condemn the brutal murder of the farmers and to sack the minister of state for home affairs have shocked the conscience of the country, it said.