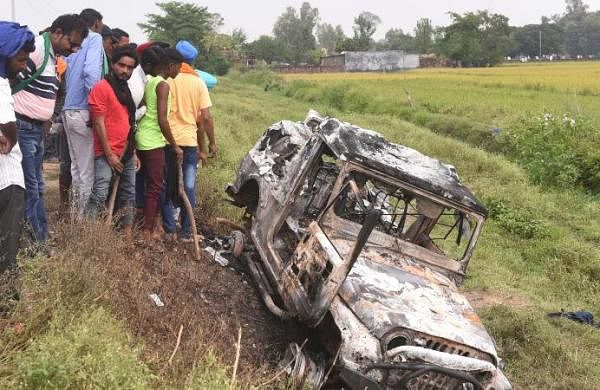 LUCKNOW: The Special Investigation Team (SIT) probing the Lakhimpur Kheri violence case on Tuesday released pictures of six people standing near an SUV, which was set ablaze during the October 3 incident.

It has assured that details of those giving information will not be revealed besides informers will be given due rewards.

The Yogi Adityanath government in Uttar Pradesh had set up the SIT to investigate the Lakhimpur Kheri violence case in which eight people, including four farmers, were killed.

"The SIT team probing the October 3 violence has got some photos and videos. We are releasing photographs and appeal to people to identify them," an SIT official said.

"Six photographs have been released for identification," he said.

The SIT has already issued notices to over three dozen farmers for questioning in a case related to the lynching of BJP workers.

Two FIRs were registered at the Tikonia police station after eight people, including four farmers, were killed in the violence.

In the first FIR, MoS Ajay Mishra's son Ashish was named as accused besides 15 to 20 unidentified persons.

Another FIR was lodged at the same police station on the basis of a complaint by Sumit Jaiswal, who has now been arrested.

In the complaint, Jaiswal, a resident of Ayodhyapuri here, identified himself as a BJP worker who was on his way to welcome Uttar Pradesh Deputy Chief Minister Keshav Prasad Maurya for a wrestling event at Banbirpur, when the violence broke out.

So far, 10 people, including the MoS' son Ashish Mishra, have been arrested in the case.

The farmers alleged that Ashish Misra was present in one of the vehicles during the incident, a charge which has been denied by him.

The minister's son claimed he was present in Banbirpur village at the time to attend a wrestling event.

Among eight killed, four were farmers, one was a local journalist and three were BJP workers.