'Landless for 10-12 years': The flood-hit in Assam whose everything Brahmaputra swallowed up 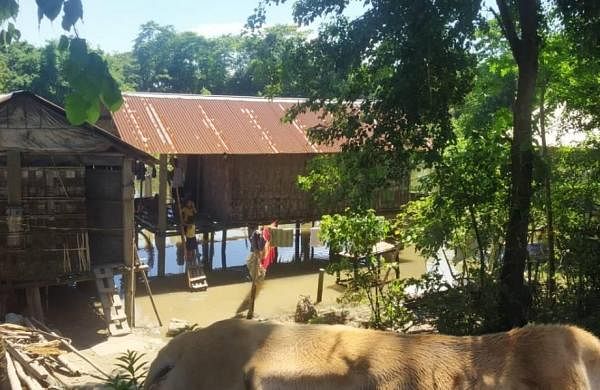 GUWAHATI: Deepa Rani Payun cannot return to the place she grew up -- that home on the river island of Majuli in Assam does not exist anymore after being devoured by the mighty Brahmaputra.

The 46-year-old, who led a good rural life, has been holed up at a shelter along a river embankment for the last 16 years. Like her, thousands others are leading a cluttered existence due to the lack of basic amenities. Not only have their homes been destroyed, even their land has been swallowed by the raging river.

The flood-affected in the state are facing displacement in equally-dangerous and unhealthy locations as the furious river erodes new areas.

Deepa hails from Kaniajan village. Her family lost 120 bighas of land, much of it agricultural, to the Brahmaputra.

"I have seen it all since I was a child. The river swallowed everything, bit by bit," Deepa who is single and stays with her elder brother, told The New Indian Express. She belongs to the Mishing tribe, a community that evolved by the side of the Brahmaputra.

"The Mishings in rural Assam usually live on stilts in spacious areas and rear pigs. There is hardly any space for the children to play on the embankment or the pigs to be reared," she said.

Not just the floods, siltation also displaces thousands in Assam every year. Large swathes of land in parts of the north bank of the Brahmaputra virtually turned deserts due to siltation.

Amulya Pamegam is a victim of siltation. It destroyed the land in his Alimur Mishing Gaon and four adjoining villages.

"We relocated to a PWD road near Kamalabari Ghat in 2004. Some 1000 families from the five villages with a population of around 5000 have been settled by the side of the road since," Pamegam, who drives an ambulance, said.

He lives with his wife and son. His only daughter has been married off. River erosion is a more serious problem that has displaced thousands in different parts of Majuli, he said.

These settlers have no access to potable water. While some installed tube wells, others rely entirely on the Brahmaputra. They built their toilets. Some were built by the government. They have electricity at home. The families send their children to nearby schools.

"As the toilets were built haphazardly and unscientifically, you will not be able to pass through our area during monsoon. It stinks," Pamegam told The New Indain Express.

Even as their sufferings continue, an official from the land revenue department visited the area recently to record the details of the settlers. Pamegam said the official told them they would be evicted as the government would widen the road.

"Where will we go? We have no idea if we will be resettled somewhere else. We continue to remain landless despite a fight for 10-12 years," he said.

KK Chatradhara of the Northeast Water Talk, which works on water-related issues, said there had been a change in the Assam flood pattern in recent years. He cited the case of Dhemaji, a flood-prone district on the north bank of the Brahmaputra.

"There is no flood in Dhemaji this year but some areas which never had it came under its grip. Then, there are other issues related to water. We want to highlight those through stories, digitally," Chatradhara said.

He said there had never been a survey but roughly around 1-1.5 lakh flood-affected people in Assam were living on embankments and roads.

"The government has no policy for the resettlement of flood-displaced although there are some examples where the victims were allotted land to settle," Chatradhara added.


(THE NEW INDIAN EXPRESS)
39 Days ago