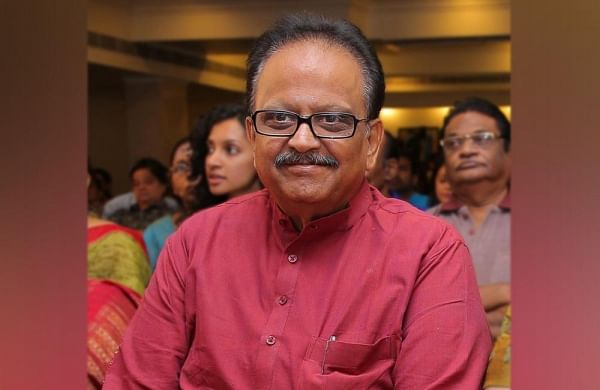 The 74-year old veteran singer, popularly known as SPB, died on Friday after an over two months-long battle with coronavirus. The singer breathed his last at around 1.04 pm, his son and filmmaker S P Charan told reporters.

Balasubrahmanyam, who captivated millions of hearts by his supreme singing talent for over five decades, was admitted to the MGM Healthcare here on August 5 after testing positive for COVID-19.

Hailing Balasubrahmanyam as a "brilliant singer" and a "kind human being", Mangeshkar reminiscenced working with him.

"I'm very disturbed by the demise of SP Balasubrahmanyam. We have recorded many song together and did a lot shows. My condolences to his family," the veteran singer wrote.

Khan, who on Thursday wished the legendary singer a speedy recovery, said he was heartbroken by the news of his demise.

"Heartbroken to hear about #SPBalasubrahmanyam sir. youwill forever live on in your undisputed legacy of music! condolence to the family #RIP," he tweeted.

Kapoor remembered the musician as "great human being" and "an incredible singer" and said that he will be "missed truly".

"Lucky to have had him dub for me. Give his voice to my performances in my first Telugu and Kannada film. SP Balasubrahmanyam will be missed truly. my heartfelt condolences & prayers to the family." he added.

Kumar said he is "deeply saddened" by the news of Balasubrahmanyam's death.

"Just a few months back I'd interacted with him during a virtual concert in this lockdown. he seemed hale, hearty & his usual legendary self. life is truly unpredictable. My thoughts & prayers with his family," he wrote.

"Baahubali" star Krishnan tweeted, "Someone so special can never be forgotten, may his soul rest in peace my deepest condolences to the family. #ripspb sir" Filmmakers Madhur Bhandarkar, Bejoy Nambiar and Sujoy Ghosh also offered their condolences.

My deepest condolences to his family members & millions of admirers globally. #OmShanti" Bhandarkar tweeted. Nambiar said Balasubrahmanyam's legacy will live on through his music.

Ghosh wrote, "A true legend. Nothing but respect for S P Balasubrahmanyam."

"My condolences and prayers to the family and fans." she added.

The health condition of the singer, who was admitted to the hospital with mild symptoms, deteriorated for the first time on August 13 after which he was put on life support and moved to the Intensive Care Unit.

On August 19, he was put on ECMO (Extracorporeal membrane oxygenation)besides ventilator and a day after, when he remained critical, people from all walks of life, including celebrities and the general public, came together to pray for his early recovery.

On Thursday, he was put on ventilator and ECMO after his condition deteriorated.