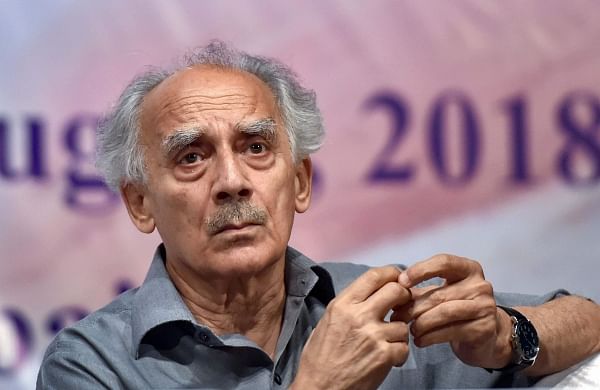 JODHPUR: The Rajasthan High Court on Wednesday stayed the arrest warrant against former union minister Arun Shourie in a case involving the sale of an Udaipur hotel at an alleged loss of Rs 244 crore to the exchequer.

The court told Shourie to appear before it and furnish a personal bond and surety on October 15, the next date of hearing in the case.

The case pertains to the sale of public sector Indian Tourism Development Corporation's Laxmi Vilas Palace Hotel to a private firm around two decades ago.

The property was sold to Bharat Hotels Ltd for Rs 7.52 crore when Shourie was the minister in charge of divestment in the Atal Bihari Vajpayee-led National Democratic Alliance government at the Centre.

During a preliminary investigation by the CBI, the property was valued at Rs 252 crore, suggesting a loss of Rs 244 crore to the exchequer.

The fifth accused in the case is Kantilal Karamsey, whose firm was involved in the valuation of the hotel.

Arguing for Shourie, senior counsel Pradeep Shah with Prashant Bhushan through video conferencing said there was neither the condition nor the urgency to summon the accused by arrest warrant and the CBI court erred in passing this order.

Admitting the arguments, Justice Dinesh Mehta converted the arrest warrant of Shourie into a bailable warrant and directed him to furnish a personal bond and surety by appearing in the court on October 15.