Locust swarms sweep into central UP, Lucknow gears up for possible invasion 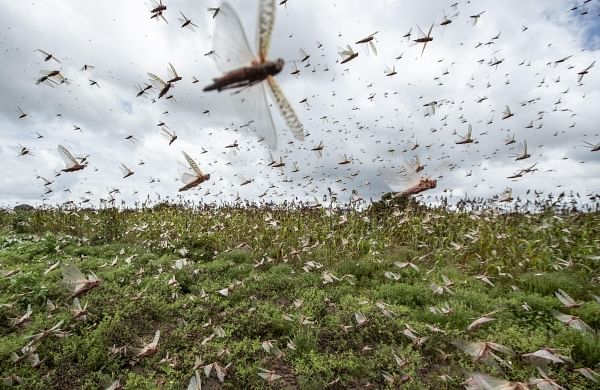 LUCKNOW: Swarms of locusts are now moving from western UP to deep into central districts such as Auraiyya, Kasganj, Farrukhabad, and Hathras.

State capital Lucknow is put on a high alert. Authorities concerned there are preparing to deal with the locust invasion as the city has enough greenery to draw the swarms.

As per the sources in the agriculture department, a swarm was about to reach Kanpur and Kasganj districts and there is a possibility of it moving to Lucknow. However, the wind direction would also decide the direction of their movement.

The districts which have already faced locust attacks include Jhansi and Lalitpur in the Bundelkhand region, Agra, Mathura, Prayagraj, Kaushambi, Pratapgarh, Gorakhpur, Siddharthnagar, and Varanasi. A swarm of locusts was last seen in Bulandshahr on Sunday. Meanwhile, on Saturday, the swarms were seen over NCR and Delhi.

According to the additional chief secretary (ACS), agriculture, Devesh Chaturvedi, the department was prepared to face any situation, a possible attack on important places like Raj Bhawan and CM House. The district administration was in alert mode with fire tenders ready to spray pesticides and keep loud music
systems in place to drive away the swarms of locusts as and when they attack.

The mango growers have also been cautioned against the locust attack. The pest has already hit 16 districts falling under seven divisions of the state. Lucknow may face a severe attack as the state capital that is full of gardens and parks.

“Raj Bhawan (Governor House) has a huge park full of greenery. Besides, places like the botanical garden and parks including Lohia and Janeshwar Mishra Park may become easy targets for the locusts.

Moreover, the outskirts of Lucknow have expansive farms and a respectable chunk of the rural population. The farms may also come under attack from the moth.

As per the preparations, both the district administration and agriculture department have alerted various bandwallas asking them to be ready with loud music systems to ward off the menace and also Municipal corporation’s water tanks and fire tenders have been kept in ready mode to spray chemicals depending on the timing of the attack, said the sources in district administration explaining the step taken at macro level to tackle any attack.

At the micro-level, farmers' teams have been constituted at the block level and have been asked to alert the authorities as soon as they spot any swarm of locusts in their area, said the sources.

The locust menace, according to those aware of the issue, may continue till September-October unless there are heavy rains that help kill them.