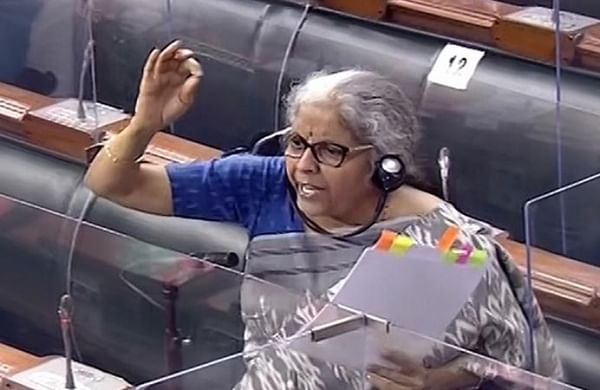 NEW DELHI: A bill to amend the general insurance law to allow the government to pare its stake in state-owned insurers was passed on Monday by Lok Sabha without a debate amid continuing protests by opposition parties on the Pegasus snooping and other issues.

Moving the bill for consideration and passage, Finance Minister Nirmala Sitharaman said that she wanted to respond to the concerns raised by the Opposition members but could not do so as the House was not in order.

Accusing the Opposition of spreading falsehood about the Bill, she said if "they are serious, they should sit down, debate and ask questions. Since you are afraid that truth will come out, you don't want discussion."

She was responding to allegations made by Congress leader Adhir Ranjan Chowdhury who described the amendment bill as "anti-people and anti-national" and alleged that it was meant to sell public assets to select business houses.

Sitharaman sought to counter the criticism by stating that private sector companies were providing better insurance to people at a lesser premium.

Amid continuing protests by the Opposition over issues like Pegasus snooping and farm laws, the Minister moved that the amendment bill be passed.

It was quickly approved by the voice vote.

Rama Devi, who was in the Chair, adjourned the House for the day soon after the passage of the Bill.

As per the statement of objects and reasons of The General Insurance Business (Nationalisation) Amendment Bill, 2021, it seeks to remove the requirement that the central government should hold not less than 51 percent of the equity capital in a specified insurer.

To provide for greater private participation in the public sector insurance companies, enhance insurance penetration and social protection, better secure the interests of policyholders and contribute to faster growth of the economy, it has become necessary to amend certain provisions of the Act, according to the Bill.

The Bill was introduced in Lok Sabha on Friday by Sitharaman.

The finance minister in the Budget 2021-22 had announced a big-ticket privatisation agenda which included two public sector banks and one general insurance company.

"We propose to take up privatisation of two Public Sector Banks and one General Insurance company in the year 2021-22. This would require legislative amendments," she had said at the time.

Now, one of these will be privatised for which the government is yet to finalise the name.