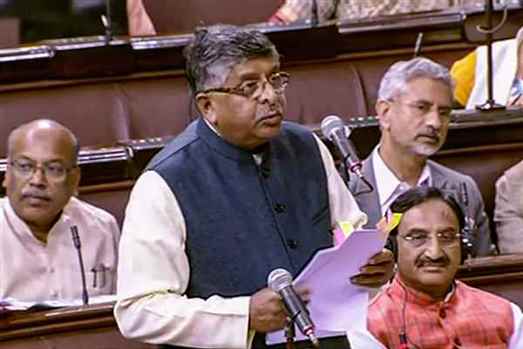 The Lok Sabha has passed the Constitution (One Hundred and Twenty-Sixth Amendment) Bill, 2019 with bipartisan support.

All 355 members in the House voted in favour of the Bill when it was put to division.

The amendment seeks to extend the reservation for SCs and STs by another ten years.

Originally the reservation is to expire by the 25th January next year, and the Bill is intended to extend it till 25th January 2030.

In his reply to the discussion, Minister of Law and Justice Ravi Shankar Prasad said, the SCs and STs have been subjected to deprivation and discrimination for long and therefore the extension of the reservation is a just move.

He said, a new generation of leadership is arising from among the deprived communities due to the political reservation being extended to them. He said the learned arguments placed before the House by MPs from the communities substantiate the fact.

Mr Prasad said, there is no need for initiating any discussion on creamy layer among the SCs and STs.

On reservation in private sector, he said the private industries are being sensitized about it. He also said, the Government is working with the Supreme Court to increase the representation of the deprived sections in the higher judiciary so that the most talented members could render their services to the nation.

On the reported delay in the delivery of justice in cases of gender violence against women and children, he said the Government is working with the judiciary to expedite the process within six months of initiating the investigation.

The Minister said, the Anglo-Indian community is not included in the scope of this Bill as their total population as per the Census-2011 is only 296 in the whole country. He said, most members of the community have been assimilated with the passage of time and some of them have migrated.

However, he said, a call needs to be taken about their nomination in state legislature through nomination.

Earlier, initiating the discussion, Hibi Eden of Congress said, the population figure of Anglo-Indians as referred to by the Minister is grossly under-estimated and said nomination for them in legislative bodies should be extended. He said a committee should be constituted to study the present socio-economic, education and job status of the Anglo-Indian community in the country.

Dr Heena Gavit of the BJP said, the human development index of the SCs and STs are far below as compared to the national average and said the extension of the reservation is a step in the right direction.

DMK member Kanimozhi said the nomination of Anglo Indians in state legislatures is being sought to be repealed without consulting the state governments concerned and charged that the powers of the states are being appropriated by the Centre.

Welcoming the extension of reservation for the SCs and STs, she stressed that Women’s Reservation Bill should also be passed.

Saugata Roy of AITC said, the mosaic of Indian society consists of people of all faith and said the Anglo-Indians should not be excluded in the Bill.

Krupal B.Tumane of the Shiv Sena welcomed the Bill, adding the plight of Anglo-Indians should also be considered.

Sunil Kumar Pintu of the JD(U) welcomed the Bill and suggested that those from the reserved category who have been elevated to a significant level in terms of economic status and power may give up the reservation so that other deserving people in the same category could be benefited.

Bhartruhari Mahtab of the BJD expressed concern over the changing demography of tribal and forest areas due to industrialization and urbanization.


Supriya Sule of the NCP while welcoming the extension of the reservation said all stakeholders should have been consulted before drafting the Bill. (AIR)