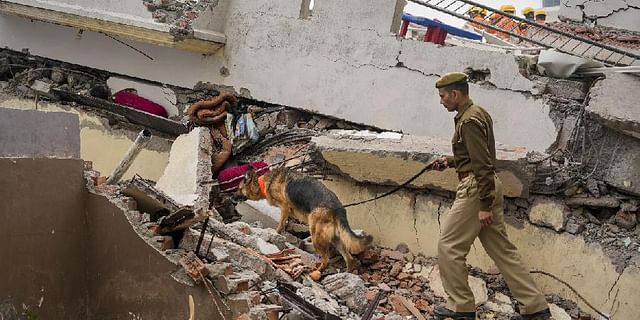 LUCKNOW: Two women who were rescued from the rubble of a five-storey residential apartment that collapsed in Lucknow on Wazir Hassan Road in the posh Hazaratganj area of Lucknow on Tuesday evening succumbed to their injuries and suffocation during treatment at the hospital.

The deceased were identified as Beghum Haider (72) and Uzma Haider, mother and wife of Samajwadi Party leader Abbas Haider. Uzma, a former journalist herself, belonged to a family of media persons. Both the deceased were pulled out in critical condition from the rubble on Wednesday morning. They
were rushed to the hospital where they breathed their last.

Debris of a multi-storey residential building after it collapsed in Lucknow's Hazratganj, which left at least three people dead and some others feared trapped in the rubble, Tuesday, Jan. 24, 2023 | PTI
SP Spokespersons Abbas Haider blamed the state government for the death of the two members of his family while expressing his anguish over the rescue operation.

“They did not conduct the rescue work sincerely. It was all an eyewash. The NDRF and SDRF teams were busy portraying their sincerity to the media. Delayed and inefficient rescue operations resulted in the death of the women of my family,” said a distraught Abbas Haider.

However, an FIR has been lodged against three people under Sections 308, 3232, 402 and 120B of the Indian Penal Code (IPC) in connection with a multi-storeyed building collapse.

An undated file photo
of a multi-storey
building situated at
Wazir Hasan road,
in Lucknow.
Of the three accused, Nawazish Shahid and Mohammad Tariq happen to be the owners of the land on which the structure was built while the third accused Fahad Yazdani had constructed the building.

While confirming the casualties and the case lodged against the land owners and builder of the Alaya apartment under sections pertaining to culpable homicide not amounting to murder, Lucknow Police Commissioner, SB Shiradkar said that rescue operation was still on to remove the rubble from the spot as there was a very remote possibility of someone lying trapped under the debris anymore.

The police commissioner claimed that all 16 persons including the two deceased, were rescued from the spot. The remaining injured persons, including those who were taken out of the collapsed site on Tuesday evening, were undergoing treatment at various hospitals in Lucknow.

He said a team of senior police officials was looking into the collection of valuables which the building occupants lost in the collapse. “The team will collect and hand over the valuables, documents and other things to the owners,” said the police commissioner.

While SP MLA Shahid Manzoor’s son Nawazish is already in police custody and would be produced in the Lucknow court soon, Tariq, SP MLA’s nephew and builder Fahad Yazdani was elusive. Nawazish, however, claimed that he had nothing to do with the construction and that he was being framed by Yazdani who constructed the building.

Meanwhile, the state government set up a three-member committee headed by Lucknow Divisional Commissioner Roshan Jacob with Joint police commissioner Piyush Mordia and PWD chief engineer as members to probe into the case. The committee has been asked to submit its report within a week’s time.

Rescue operation underway after the collapse of a four-storey residential building in the Hazratganj area, in Lucknow on Jan. 25, 2023 | PTI
Although the cause of the collapse has not been clarified, officials have said the building - comprising as many as 12 flats and two penthouses on the top floor was illegal and the builder had not got the layout map passed by the Lucknow Development Authority.

Lucknow Divisional Commissioner Roshan Jacob and Uttar Pradesh DGP DS Chauhan said
that the “strictest action” would be taken against whoever was found responsible for the incident.

Samajwadi Party president Akhilesh Yadav expressed his condolences for the demise of Haider. Taking to Twitter, the former UP chief minister said that he is extremely saddened by the death and wished for “peace to the departed souls”.