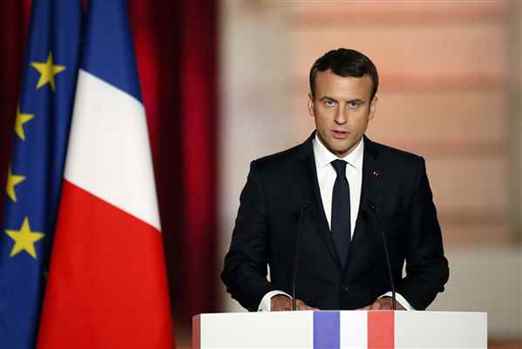 In his first Bastille Day interview, President Emmanuel Macron promised that France is ready for a second epidemic wave and his team will follow a “new path” based on social dialogue to address the challenges triggered by the coronavirus crisis that has claimed over 30,000 lives and plunged the growth of the euro zone’s second-largest economy.

He noted “uncertainties” and “signs” suggesting that the virus “restarts a little.” But, he reassured that the country was getting ready if the virus hits again.

“Now, we have both stocks and supplies and we have the organization as close to the ground as possible, which would make it possible to face a resurgence,” he said.

Adding to that, he said France will make wearing face masks compulsory at all enclosed public places starting from August 1 as one of the measures to contain any eventual resurgence of the epidemic.

“We are doing everything to avoid a new wave and to take a differentiated approach,” he said, pledging “to isolate as quickly and as locally as possible.”

Macron also confirmed that France would be among the first countries to get access to a potential vaccine being developed by French drugmaker Sanofi.

As of Monday, 172,377 people had been tested positive for the COVID-19 in France, of whom, 30,029 have succumbed to the respiratory illness since early March.

According to the Public Health Agency, 94 clusters were under investigation.

As the coronavirus crisis has taken a toll on domestic economic activities, Macron unveiled a package of measures to avoid massive layoffs and bring down jobless claims, which he said were estimated between 800,000 and 1 million by 2021.

“In the coming six months, the priority is employment and to preserve jobs,” he said.

With the aim, he proposed a long-term furlough scheme that would allow some people to keep working through the crisis, 300,000 subsided contracts for young people emerging into workforce, and qualified training for 200,000 people.

Macron also defended the method he used to implement “reforms that were thought impossible.” He, however, noted that the “new path” for the remaining 500 days in office should be based on “social dialogue and citizens trust.”

In the past three years, Macron, 42, has been changing labor code, reforming rail sector and education system, and overhauling pension regimes, areas in which he was facing fierce opposition that drew thousands to the streets in addition to rolling strikes.

“One can criticize, I am for the debate,” he said, proposing to renegotiate his proposal to change the current pension system, his latest reform which had sent his approval ratings to a record low.

“The pension reform cannot be done as it was presented before the crisis. Prime Minister Jean Castex will bring together all the social partners on Friday to put everything back on the table,” he said.

Challenging a taboo, Macron proposed a point-based pension system with the same rules applying to all, regardless of profession or sector, to replace the current system of multiple regimes.

Critics say that the reform would effectively force people to work longer, public sector workers in particular. The government argued that the reform is needed to bring the costly pension system into balance.