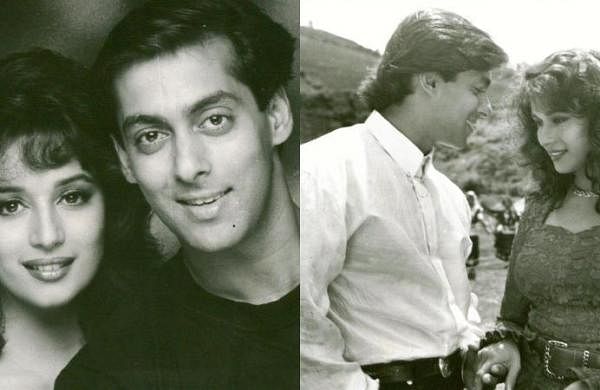 As the cult classic completed a milestone today, the leading lady of the movie, Dixit took a walk down the memory lane and remembered the "fun memories and hard work" of the entire team.

The 'Devdas' actor also had a little fun as she posted a "then and now" moment by sharing a throwback, and a recent picture, in the same pose with her co-star Salman Khan.

Thanking the scores of fans who still enjoy watching the romantic drama, Dixit tweeted: "Then & now! Can't believe it's been #26YearsOfHAHK. Remembering the fun memories & hard work of the incredible team who left no stone unturned to perfect every single scene"

Then & now! Can't believe it's been #26YearsOfHAHK. Remembering the fun memories & hard work of the incredible team who left no stone unturned to perfect every single scene Thanks to everyone for watching & enjoying the film even today. बहुत बहुत धन्यवाद और ढेर सारा प्यार pic.twitter.com/Rp07h3Pfiu

The iconic hit wasn't a mere film but a rich source of inspiration for people of all age groups. It also brought about a revolution in Indian weddings in the 90s.

'Hum Aapke Hain Koun' was a modern take on the 1982 film 'Nadiya Ke Paar'. It was the first Indian film to gross Rs 100 crore at the box office.

The flick won 13 Filmfare Awards, which included those for Best Film, Best Director, and Best Female Actor. The blockbuster became a turning point in both, Dixit, and Khan's career.

Dixit, who played the role of Nisha in the 1994 Sooraj Barjatya-directorial, was romantically paired opposite Khan's character (Prem).

The cult classic also featured Mohnish Bahl, Alok Nath, and Bindu among others.

(THE NEW INDIAN EXPRESS)
538 Days ago