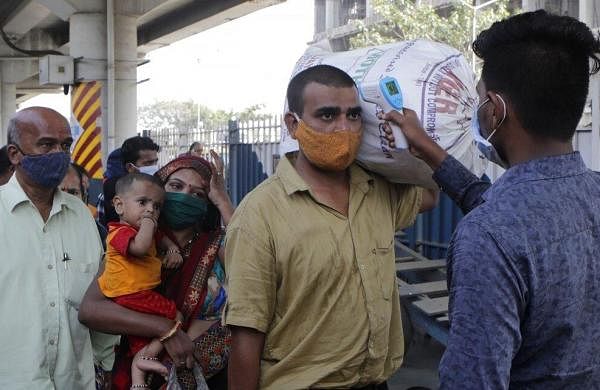 As to rules for international travelers, state chief secretary Sitaram Kunte told PTI that the government was working on it in collaboration with the Mumbai civic body and Union health ministry.

All travelers from foreign countries shall be governed by directions of the Union government while domestic travelers arriving in the state shall either be fully vaccinated or carry a negative RT-PCR test report valid for 72 hours, said an official notification.

Mumbai Mayor Kishori Pednekar had said earlier in the day that passengers from South Africa, where cases of the new variant have been found, will be quarantined and their samples will be sent for genome sequencing.

Any person not following CAB will be fined Rs 500, new guidelines issued by the government said.

If such violation by a person takes place on the premises of an organization which is supposed to impose CAB, it will be fined Rs 10,000.

If any organization itself fails to follow CAB, it will face a fine of Rs 50,000, and frequent violations of rules will lead to its closure for the period of the pandemic.

Violation of rules in private taxis or in public transport vehicles will lead to fine of Rs 500, while owner of the transport agency shall be fined Rs 10,000.

Full vaccination would be mandatory for using any means of public transport, the notification said.

The universal pass of the state government will be valid proof of full vaccination (having taken two doses).

At public programs, shows or events, whether ticketed or non-ticketed, full vaccination would be mandatory for organizers as well as participants/viewers.

Shops, malls and other locations where any service is provided, employees as well as customers will have to be fully vaccinated.

For those below 18 years of age (and hence not vaccinated), government or school-issued photo identity cards would be necessary.

Adult persons who could not take the vaccine for medical reasons should carry a medical certificate.

on Saturday reported 889 new coronavirus positive cases and 17 related fatalities, taking the tally to 66,33,612 and the death toll to 1,40,908, state health officials said.

The state had added 852 cases and 34 deaths in the last 24 hours preceding Friday.

With 738 people being discharged from hospitals in the last 24 hours, the number of recoveries in Maharashtra went up to 64,80,799, leaving the state with 8,237 active cases, a health official said.

The cumulative number of tests conducted in Maharashtra so far climbed to 6,52,56,850 with 1,01,557 new tests being conducted, the lowest in recent times, in the last 24 hours, the official said.

At least 10 districts and four municipal corporations in Maharashtra did not report any new COVID-19 cases in the last 24 hours.

Among the eight regions in Maharashtra, the Mumbai region reported the highest 385 cases, the Pune region 246, and Nashik region 169.

The Mumbai region reported five fresh COVID-19 fatalities, followed by four each from Kolhapur and Latur regions, and two each from Nashik and Pune regions.

Aurangabad, Akola, and Nagpur regions, however, did not report any fresh deaths due to COVID-19, the health official said.

Among 8,237 active patients in Maharashtra, the Mumbai district has the highest 2,250 such cases.

Of 64,80,799 recovered patients in Maharashtra, the highest 11,38,342 recoveries are from the Pune district, the official added.

Urban Development Minister Eknath Shinde on Saturday asked Thane district authorities and local civic officials to keep hospital facilities ready and ensure strict adherence among people to COVID-19 protocols in view of the emergence of a new variant of the infection.

The new B.1.1.529 variant detected in the southern part of Africa, which has now been named Omicron by the World Health Organisation, has been classified as a 'Variant of Concern' due to its reported high transmissibility.

Shinde, during the meeting held through video conferencing, said the Maharashtra government was prepared to tackle any eventuality, and directed officials to carry out audits of COVID-19 hospitals and other facilities to ensure preparedness against any spike is at its optimum.

The minister said some of the treatment facilities shut due to a fall in case numbers must be kept ready for reopening as soon the need arises, district officials said.