Maharashtra BJP opposing MVA govt's every move for sake of it: Sanjay Raut 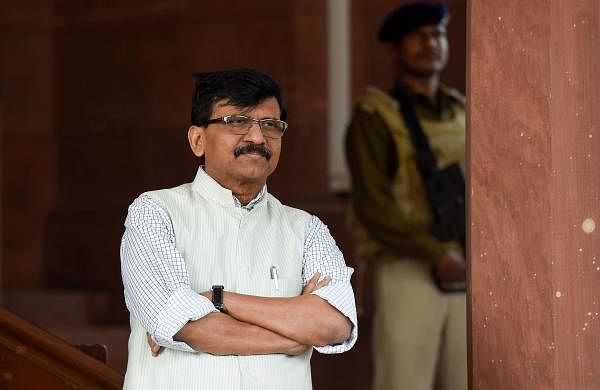 MUMBAI: Shiv Sena MP Sanjay Raut on Sunday claimed BJP leaders in Maharashtra were opposing every move of the Uddhav Thackeray-led Maha Vikas Aghadi (MVA) government just for the sake of it.

In his weekly column 'Rokhthok' in the Sena mouthpiece 'Saamana', Raut, referring to the controversy over reopening places of worship in the state, said those who link fight against COVID-19 to 'Hindutva' are "enemies" of the people.

He also said the unlock process in Delhi began too soon, leading to the present spike in COVID-19 cases there.

Blaming the Delhi government's "overconfidence" for the present crisis, the Sena's chief spokesperson apprehended another lockdown in the national capital.

"Markets, public places and places of worship will be closed down again. Why did this happen, Maharashtra BJP leaders should think. They are opposing every move of the MVA government for the sake of it," he said.

The Rajya Sabha member further said BJP leaders staged protests over their demand for granting permission for the 'Chhath Puja' celebration in Maharashtra.

"You may have won the Bihar polls, but there is no need to drag Mumbai's Bihari population into the controversy. Lakhs of people gather on Mumbai's seashore and in the pandemic, this is illegal," he said.

The BJP governments refused permission for Chhath Puja at public places in Gujarat, Haryana, Madhya Pradesh, but the party demands the same in Maharashtra, he said.

"The BJP wants to criticise every step of the state government even if it means people lose their lives," he alleged, and said if the BJP feels there should be another lockdown in Maharashtra, "it is the state's bad luck".

Raut also said those who could not give the 'Bharat Ratna' to Hindutva ideologue V D Savarkar are planning to rename Jawaharlal Nehru University (JNU) in Delhi.

"This is laughable. Create your own legacy instead of renaming institutions in whose creation you have no role to play.