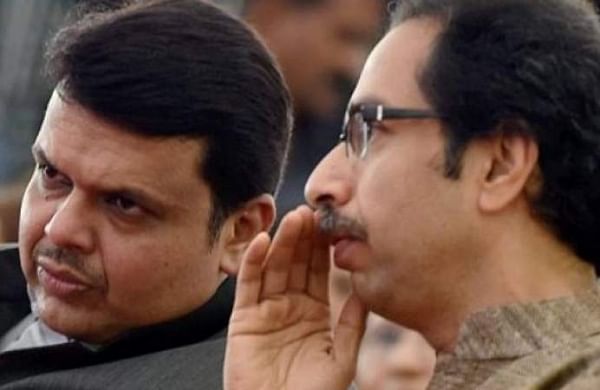 MUMBAI: After a political drama stretched over the past fortnight, Devendra Fadnavis finally resigned and become caretaker Chief Minister of Maharashtra on Friday even as Shiv Sena remained aloof.

While giving ample indications of the contrary, both the parties kept saying that this is not an end of the alliance, but they will have their man in the CM’s chair. While the state has slipped into a politically fluid situation, none of the political parties are disclosing their options.

Fadnavis and Thackeray addressed press conferences in the evening to put across their versions of the reasons behind the deteriorating relations and the derailment of talks.

While the BJP is upset due to unrealistic demands and constant bickering from the ally, the turning point was “Uddhav Thackeray’s statement immediately after assembly result that all options are open,” said Fadnavis.

In retaliation, Thackeray played video clips of Dushyant Chautala’s expletives against Modi-Shah duo and also raised questions over BJP’s strange bedfellows over past few years from Kashmir to Bihar.

Uddhav Thackeray maintained that he is hurt as an attempt was made to prove him a “liar”. “Thackeray’s don’t lie. That is not our culture. I can’t tolerate such an attempt,” he said while asking the RSS to explain what kind of Hindutva it was where people lie while forming an alliance.

“I had raised the party’s claim on CM’s post at meeting with Shah and Fadnavis during alliance talks before Lok Sabha polls,” Uddhav Thackeray. However, union minister Nitin Gadkari and even Fadnavis said that no decision was made on the Shiv Sena’ claim and it was decided that the matter would be discussed after the assembly results.

Gadkari also said that the alliance principle of whoever gets more seats gets the CM’s post was instilled by Shiv Sena founder Balasaheb Thackeray.

On the charges of MLAs being lured or threatened, Fadnavis said that the party won’t engage in any kind of horse-trading or breaking any other party to form the government in the state. He also challenged the Congress and the NCP to prove any such charges or face legal action.

The Sena, meanwhile, shifted its MLAs from the hotel in Bandra to a bigger hotel in Malad while writing to Mumbai police commissioner to ensure “security” of these MLAs.

Governor Koshyari is now expected to begin consultations for government formation. The Congress and the NCP, meanwhile, huddled to explore options.

“We shall decide our course of action depending upon governor’s decision in the current situation,” Thorat said after the meeting. He also made it clear that the Congress won’t take responsibility of forming government as the party lacks numbers and added that the responsibility lies solely with the BJP.

Shiv Sena MP Sanjay Raut visited Pawar’s residence twice to discuss the political situation. Union minister Ramdas Athawale too met Pawar earlier in the day after which both of them addressed media appealing the BJP and the Shiv Sena to reconcile.

Former union home minister and Congress veteran Shivraj Patil proposed a new formula where the Congress-NCP alliance government would be supported from outside by the Shiv Sena. Pawar, however, immediately junked the proposal asking whether the top leadership of the party approves the proposal.