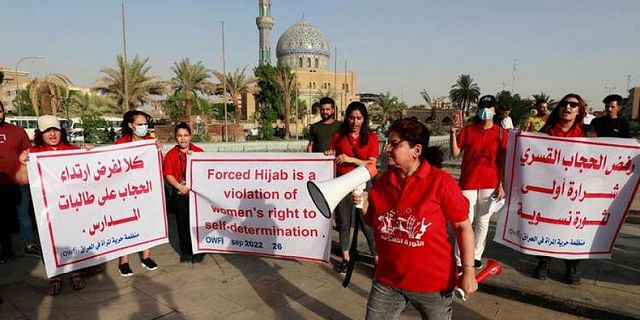 It's called the 'Iran revolution.' But the thing is that its repercussions can be felt across the world. This is what is significant about the ongoing protests led by women.

The outrage of women in Iran, and the scores supporting the protests across the world, was triggered by the killing of 22-year-old Mahsa Amini by the morality police for refusing to wear a hijab on a visit to Tehran on September 17.

“It is not an Iranian revolution, or even a Kurdish revolution. It is a women’s revolution, " Rozhin, 25, from the Kurdish city of Kermanshah, was quoted as saying by The Guardian.

Zar. Zendegi. Azadi. (translation: Women. Life. Freedom) --- the slogans of the ongoing protests. And rightly so.

In Sanandaj, the capital of Amini's western home province of Kurdistan, women climbed onto the roofs of cars to tear off their headscarves in front of cheering crowds, images published by Oslo-based group Iran Human Rights (IHR) showed, with police nowhere to be seen.

Over 76 anti-government protesters have been killed by security forces so far, according to the Oslo-based group Iran Human Rights (IHR), while Iran's semi-official Fars news agency has put the toll at "around 60". Authorities said Monday they had made more than 1,200 arrests.

Hundreds of people have also been arrested including 20 journalists even as the protests have reportedly spread to more than 80 cities and towns across Iran since the funeral of Mahsa Amini.

Mahsa Amini died after 'violent blow to head': Her kin

Amini, an Iranian Kurdish woman, was visiting Tehran with her family when she encountered the notorious morality police and died after a "violent blow to the head", her cousin living in Iraq said.

"Jhina's death has opened the doors of popular anger," said Erfan Salih Mortezaee, 34, using Amini's Kurdish first name and referring to the ongoing wave of protests that her death has sparked.

In a phone call after the young woman's death was announced, Amini's mother told him what happened when her 22-year-old daughter was detained, Mortezaee said.

AFP spoke with Mortezaee in Iraq's autonomous Kurdistan region -- bordering Amini's native Kurdistan province in Iran -- where he has been living for a year.

There he joined Iranian Kurdish nationalist group Komala, which has conducted a long-running cross-border insurgency against the Tehran authorities, seeking autonomy for Kurdish-populated areas of northwestern Iran.

Mortezaee said that, before starting university, Amini had gone to Tehran with her parents and 17-year-old brother to visit relatives.

On September 13, Amini, her brother and female relatives went out in the capital.

On leaving the Haghani underground station, "the morality police stopped them, arresting Jhina and her relatives," Mortezaee said.

Wearing military fatigues and speaking at a Komala base in the Sulaimaniyah area of northern Iraq, Mortezaee said Amini's brother tried to tell the police that they were "in Tehran for the first time" and "did not know the (local) traditions".

But his appeals fell on deaf ears.

Beatings
"The police officer told him, 'We are going to take her in, instil the rules in her and teach her how to wear the hijab and how to dress'," Mortezaee said.

Amini was "dressed normally. Like all women in Iran, she was wearing the hijab," her cousin added.

In Iran, women -- regardless of their faith -- are required to cover their hair, and the morality police bans them from wearing coats above the knee, tight trousers, bright colours or torn jeans.

The code has been widely skirted for decades, particularly in major cities, but there have been periodic crackdowns.

"The police officers hit Jhina, they hit her in front of her brother," Mortezaee said.

"They slapped her, they hit her hands and legs with a baton," said Mortezaee, adding that they also sprayed her brother in the face with pepper spray.

Jhina and her relatives were forced into the morality police van and taken to a station on Vezarat Street.

The beatings continued during the ride, Mortezaee said.

"When they hit her in the head with the baton, she lost consciousness," he said. "One of the officers said: 'She's putting on an act'."

After they arrived, it was at least another hour and a half before she was taken to a Tehran hospital, despite pleas from her relatives, Mortezaee said.

After three days in a coma, she was pronounced dead.

Amini's mother said doctors at the hospital told the family that her daughter "had received a violent blow to the head", Mortezaee said.

Iranian authorities have denied all involvement in Amini's death, which has sparked 12 consecutive nights of protests and a security crackdown.

"What is happening in Kurdistan and everywhere else in Iran is popular anger against the Islamic republic's regime, against the dictatorship," Mortezaee said.

The protests come at a particularly sensitive time for Iran's leadership, when the country's economy remains mired in a crisis largely caused by US sanctions over its nuclear programme.

READ HERE | Iranian women chop off their hair, burn hijabs in protest; read to know why

The country has seen protests in recent years, including deadly demonstrations in November 2019 over fuel price rises.

But this time "women are taking the lead and are actively taking part in the protests", Mortezaee said.

"Women are participating in the demonstrations courageously and are taking to the streets, day and night," he said.

"We the youth know that if this regime falls, a better life awaits us."

Iran's police command warned on Wednesday that the force would come down hard on protests that erupted nearly two weeks ago over the death of a young woman in custody.

"Police officers will oppose with all their might the conspiracies of counter-revolutionaries and hostile elements, and deal firmly with those who disrupt public order and security anywhere in the country," it said in a statement, quoted by Fars news agency.