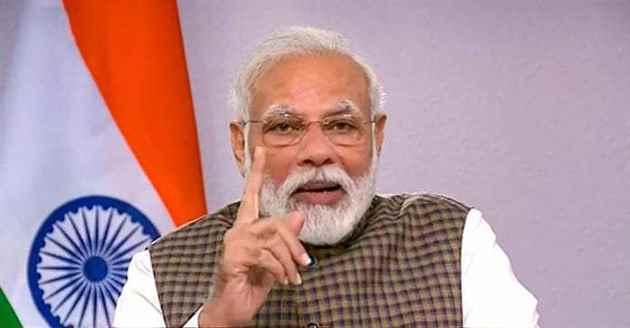 Prime Minister Narendra Modi has said that India's diversity fills each and every countryman with a sense of pride. Sharing his thoughts in the 62nd episode of Mann Ki Baat programme on All India Radio this morning, he said, the expanse and diversity of the Nation is a source of inspiration for the citizens.

Citing his recent visit to Hunar Haat in the national capital, Mr Modi said, it reflects the country’s diverse expanse, cultures, traditions, cuisines and the warmth of emotions. The repertoire comprising traditional attires, handicrafts, carpets, utensils, bamboo and brass products, musical instruments represented the unique and vivid mosaic of pan- Indian art and culture. He further stated that the stories of the artisans’ perseverance, zeal and love for their skill are equally inspiring.

Mr Modi said, listening to a divyang woman at the Hunar Haat was a source of fulfillment for him. Earlier, the woman used to sell paintings on the pavement and her life changed after she connected with Hunar Haat. Today, she is not only self- reliant but also has purchased a house.

Mr Modi said, at Hunar Haat, he got the opportunity to converse with many other artisans and over 50 per cent of the crafts persons participating at Hunar Haat are women. The Prime Minister told that over the past three years, through Hunar Haat, close to three lakh artisans and crafts persons have gained many employment opportunities. He said, people should attend such events to know India and to experience the country and contribute to the progress and prosperity of hardworking crafts persons, especially women.

Mr Modi said a nation that is fit will always be a nation that is a hit. He appealed people to pick up activity of their interest and integrate their lives with adventure. He said the geography of India provides many opportunities for adventure sports as it is blessed with mountains, deserts, forests and sea.

The Prime Minister cited the example of Kamya Karthikeyan who has conquered Mount Aconcagua at the young age of just twelve years. This is the highest peak of the Andes Mountains in South America, which is about 7000 meters high.

Mr Modi said, India's children and youth are increasingly taking a keen interest in Science and Technology. He said, record satellite launches into space, new records, new missions fill up every Indian heart with a sense of pride. Mr Modi recalled that when he was in Bengaluru during the launch of Chandrayan-2, he witnessed immense enthusiasm on the part of the children present there. The Prime Minister said a visitors’ gallery has been erected at Sriharikota to sit and watch rocket launching to encourage scientific temper in children and young people. Mr Modi urged the Principals and teachers of all schools to take benefit of the facility.

He said, ISRO's Yuvika programme is a very commendable effort to integrate the youth with science. Mr Modi said, Yuva Vigyani Karyakram, YUVIKA program is in tune with the Government's vision of Jai Jawan, Jai Kisan, Jai Vigyan, Jai Anusandhaan. In this programme, students visit different centres of ISRO during their holidays and learn about Space Technology, Space Science and Space Applications.

Mr Modi said, Ladakh witnessed a momentous event on 31st of last month when an Indian Air Force AN-32 aircraft took off from Leh Kushok Bakula Rimpoche Airport. A mixture of 10 per cent Indian Bio-jet fuel was used in this flight and this was the first time that this mix was used in both engines. He said, the bio-jet fuel was prepared from non-edible tree borne oil and procured from various tribal areas of India. He said, such efforts will not only reduce carbon emissions but may also reduce India's dependence on crude oil imports.

The Prime Minister also said India is home to many migratory species and over 500 varieties of birds fly in from varied regions. He said, this phenomenon was discussed and deliberated in the recently held COP-13 in Gandhinagar. He expressed delight that biologists have recently discovered a new species of fish whose habitat is within the caves of Meghalaya.

Prime Minister Modi exuded pride that women in New India are taking on new challenges and setting a pace for a positive transformation in the society. He cited the example of women in Purnia of Bihar who formed mulberry-production co-operatives with assistance from the Government. The women of Adarsh Jeevika Mahila Mulberry Production Group spun silk yarn from the cocoons and also started getting sarees made with those threads which are fetching thousands of rupees now.

Mr Modi also gave the example of 105 year old Bhagirathi Amma from Kollam in Kerala who restarted her school education despite her advanced age.

He also lauded the effort of Salman from Hamirpur village of Moradabad. Salman is a divyang by birth who manufactures slippers and employs 100 other divyangs like him.

He also praised Ismail Khatri of Ajrak village in Kutch area of Gujarat who stayed back in his village following the earthquake in 2001. Khatri nurtured his traditional art form of ‘Ajrak print'.

The Prime Minister shared his greeting with fellow citizens for Mahashivaratri which was celebrated on Friday. He greeted the Nation for the upcoming festivals of Holi, Gudi Padva, Navaraatri and Ram Navami. Mr Modi said, festivals and celebrations are an inseparable part of the social fabric and each festival has a hidden social message of unity. (AIR)