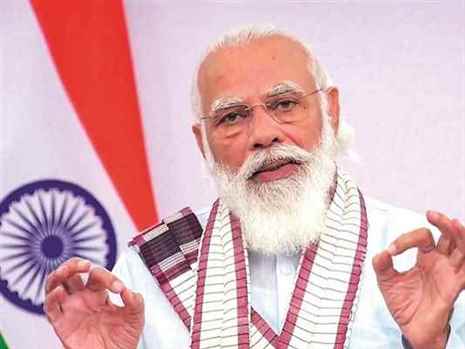 Prime Minister Narendra Modi has urged the people of the country to give priority to local products while shopping during this festive season. Addressing the nation through his Mann Ki Baat programme on All India Radio this morning, Mr Modi asked everyone to remember the resolve of Vocal for Local.

He said the whole world is becoming fan of Indian products. He stressed that many local products have the potential of becoming global and gave the example of Khadi. He said Khadi has remained an icon of simplicity for a long time but is now getting recognized as an eco friendly fabric. He added that Khadi is body friendly and an all weather fabric which has also become a fashion statement.

Not only is the popularity of Khadi rising it is also being produced in many parts of the world. The Prime Minister said there is a place in Mexico called Oaxaca, where the local villagers weave Khadi. Today, the Khadi of this place has gained popularity around the world as Oaxaca Khaadi. Mr Modi recounted how Khadi reached Oaxaca through a young person called Mark Brown who was deeply inspired by Mahatma Gandhi. Mark Brown visited Bapu’s ashram in India and realised that Khadi was not just a fabric but a complete way of life. On his return to Mexico, he introduced the villagers of Oaxaca to Khadi and trained them. Oaxaca khadi has become a brand now.

The Prime Minister asked the people to visit the Oaxaca Khadi website and listen to the interview of Marc Brown. He expressed happiness that during Gandhi Jayanti this year, the Khadi store in Connaught Place at Delhi witnessed purchases of over one crore rupees in just a day. Similarly the Khadi masks have also become very popular during Corona.

The Prime Minister said Pulwama in Kashmir is playing an important role in educating the entire country. He said that India used to import wood for pencils from abroad, but now Pulwama is making the country self-sufficient in the field of pencil making. Chinar wood of the valley has high moisture content and softness, which makes it most suitable for the manufacture of pencils. In Pulwama, Oukhoo is known as the Pencil Village. Here, several manufacturing units of Pencil Slats are providing employment to hundreds including a large number of women.

Mr Modi cited the example of Manzoor Ahmad Alai from Pulwama who sold his ancestral land and established a unit to manufacture Apple wooden boxes. Manzoor was engaged in his small business when he came to know that Poplar wood , Chinar wood is being used in manufacturing pencils. Manzoor channeled his entrepreneurial spirit and started the supply of Poplar wooden boxes to some famous pencil manufacturing units. Today, his turnover from this business is in crores and is a source of livelihood for around two hundred people. Mr Modi commended him and the enterprising people for making invaluable contributions in educating the young minds of the country.

Mr Modi greeted the people on the auspicious occasion of Vijayadashami, that is Dussehra. He said the festival of Dussehra is about triumph of truth over untruth as also a victory of patience over crises. He asked people to exercise patience and observe restraint during this crisis-laden period of Corona. He asked everyone to wear masks, keep washing hands with soap and maintain two yards of social distance while enjoying the festive season.

The Prime Minister said one should remember the time of Lockdown in the midst of this festive celebration. During this period, people realised how difficult it is without cleanliness workers, local vegetable sellers, milkmen and security guards. He urged everyone to include them in festivities as they must not only be remembered during difficult times.

Mr Modi also asked people to remember the brave soldiers who are guarding the country's borders and light a lamp in their honour. He assured soldiers that the entire country is wishing well for them even though they are far away from home. He saluted the sacrifice of the families whose children are on the border today. He expressed gratitude to each and every person who is away from home and family on account of discharging duty to the country in one way or the other.

Mr Modi said many instances of technology based service delivery were explored in the country during the lockdown. He cited the example of a self help group of women in Jharkhand who accomplished this feat. These women worked to deliver vegetables and fruits to households directly from the fields of the farmers. They got an app ‘Ajivika Farm Fresh’ designed through which people could directly order vegetables to be delivered at their homes. This idea of ‘Ajivika farm fresh’ app is gaining a lot of popularity there - fruits and vegetables worth more than 50 Lakhs were delivered by them during the lockdown.

The Prime Minister also mentioned Atul Patidar of Barwani in Madhya Pradesh who connected four thousand farmers in his area through the digital medium. Through the E-platform farm card of Atul Patidar, farmers are now able to get the essentials of agriculture - such as fertilizer, seeds, pesticide, and fungicide home delivered.

Mr Modi also recounted how a farmer producer company in Maharashtra procured corn from the corn producing harvesters. This time, the company paid not just the cost of the corn but also an additional bonus as it was making profit from the new farm specific laws framed by the government.

The Prime Minister spoke about Pon Mariyappan from Thoothukudi in Tamil Nadu whose passion is to share the joys of reading and writing with others. Pon Marriyappan is associated with the profession of hair cutting and runs a salon. He has converted a small portion of his salon into a library. He offers a discount if a customer reads something from the library while waiting for his turn, and writes on that. Mr Modi said it is a very interesting initiative.

He also cited a few other examples of how people are sharing their passion of reading with others. Usha Dubey, a teacher from Singrauli in Madhya Pradesh has turned a scooty into a mobile library. Mr Modi talked about a Self Help Library set up in August at Rayo village in Nirjuli of Arunachal Pradesh. He said when Meena Gurung and Dewang Hosayi from this village learnt that there was no library in the area, they extended a hand for its funding. Anyone can borrow books for two weeks. In Chandigarh, Sandeep Kumar who runs an NGO has set up a mobile library in a minivan. Through this, poor children are given books to read free of cost. The Prime Minister said there are two organisations in Bhav Nagar, Gujarat which are doing marvellous work in this field. The Vikas Vartul Trust is very helpful to students who are preparing for competitive exams. This trust has been working since 1975 and provides 140 magazines, along with 5000 books. ‘Pustak Parab’ is a similar organization which provides literary books along with other books free of cost. Mr Modi urged people to share stories of such initiatives on social media. He quoted a line from Bhagvad Geeta - Na hi gyanen sadrusham pavitramih vidyate - which means there is nothing as sacred as knowledge in this world.

The Prime Minister said Sardar Vallabh Bhai Patel’s birth anniversary will be celebrated on the 31st of October. This day is also known as ‘National Unity Day’. He said Sardar Patel had a great sense of humour. Mr Modi asked people to keep their sense of humour alive irrespective of how difficult the situations are. He said Sardar Patel devoted his entire life for the unity of the country and integrated the Indian public with the Freedom Movement. Mr Modi said Sardar Patel worked for the integration of the Princely States with the nation. He said citizens should carry forward the entire spectrum of values that unite people through speech, bearing and actions.

He said the country's ancestors have made these efforts incessantly for centuries. He gave the example of His Holiness Adi Shankaracharya who was born in Kerala and established four important mathas in all four directions of India - Badrikashram in the North, Puri in the East, Sringeri in the South and Dwarka in the West. He also traveled to Srinagar and a 'Shankracharya Hill' exists there.

Driving home the message of unity in diversity, Mr Modi said pilgrimage in itself knits India in a common thread - the chain of Jyotirlingas and Shakti Peethas binds India with the common thread. He said the centres of faith established from Tripura to Gujarat and from Jammu and Kashmir to Tamil Nadu, unite people as one. He pointed out that the Bhakti movement became a mass movement throughout India, uniting people through devotion.

The Prime Minister said that Sikh Gurus too have enriched the spirit of unity through their lives and noble deeds. The holy sites of Sikhs include 'Nanded Sahib' and 'Patna Sahib' Gurdwaras. He said the country had luminaries such as Dr. Babasaheb Ambedkar in the last century who forged unity among people through the medium of the Constitution.

The Prime Minister said that the country has given a befitting reply every time to the forces which continuously try to sow the seeds of suspicion in people's minds, and divide the country. Giving the motto of Ek Bharat Shrestha Bharat, Mr Modi urged everyone to visit the website - ekbharat.gov.in. This website displays the efforts made to advance the campaign of national integration. It also has an interesting corner -The sentence for the day. In this section, people can learn how to speak a sentence in different languages every day. The Prime Minister also asked people to share recipes of local food items along with the names of the local ingredients, on the ‘Ek Bharat Shreshtha Bharat’ website.

Mr Modi also said that he will attend many events on 31st October to be held in and around the historic Statue of Unity in Kevadiya. 'Valmiki Jayanti' will also be celebrated on the 31st of October. Mr Modi paid his obeisance to Maharishi Valmiki saying that he was a beacon of great hope for millions of the impoverished and Dalits.